The city was later possessed by the Seleucid Empire following the Wars of the Diadochi and eventually taken over by the Roman Empire. Over the centuries Tyre has undergone many changes in possession and yet, has always remained a city of great cultural significance on the eastern Mediterranean.

However, when Alexander III the Great came invading through doing his empire building thing in 332 BC, he had a conundrum on his hands. As Alexander the Great was conquering the surrounding area the people of Tyre wished to continue remaining conflict free in order to continue their trading empire. They sent Alexander several messages congratulating him on his military victories and even sent him a golden crown to indicate their submission to his rule, much as many other nations had done. 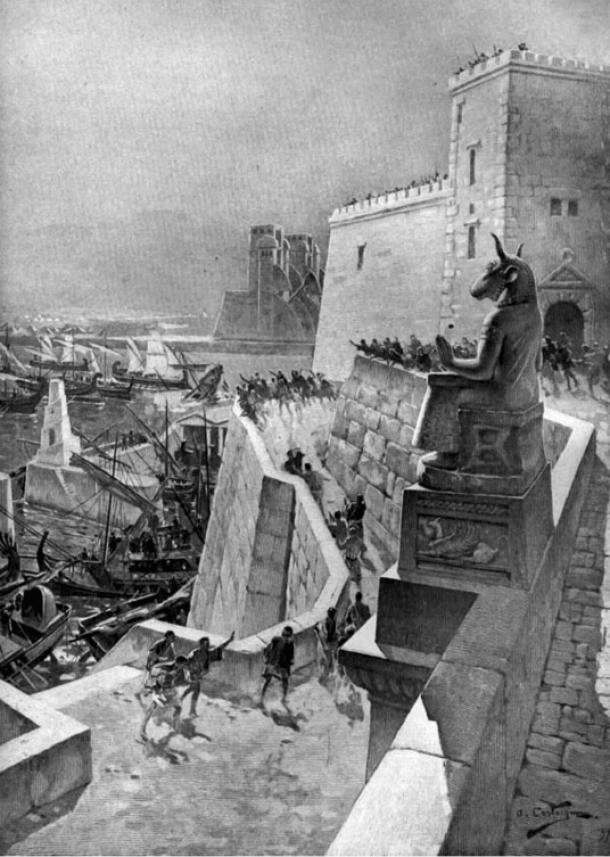 From Alexanders perspective the city of Tyre was extremely well defended but he did not want to leave it behind. This could easily prove disastrous later if they decided to go against him when he was in a different area. But how could he take the city, an island with 150 foot walls a half mile offshore with only a ground army? In addition to the walls it was also well defended by war galleys in order to prevent a potential blockade. So starving the city was out of the question, and the substantial wealth of Tyre would allow them to buy whatever they needed anyways. Alexander needed to come up with a different plan to take this city.

Through acts of pure military genius he and his engineers build a land bridge to the city of Tyre and conquered it. You can learn more about the siege of Tyre here. Following the defeat of the Tyrians during this engagement many of the wealthy were able to buy their freedom and fled to the port city of Carthage where they would manage to rebuild their maritime empire within one hundred years following the power vacuum created by the sudden and mysterious death of Alexander the Great.

Following its destruction the city was rebuilt and was taken by Seleucus I Nicator during the Wars of the Diadochi that saw the fragmentation of Alexanders massive empire. The entire region of Asia became the Seleucid Empire while the satrapy of Egypt was taken by Ptolemy I Soter who founded the Ptolemaic Kingdom. In the civilizations of Greece, Macedon and Thrace would be taken by {need name}..

In 315 BCE during the Wars of the Diadochi, Antigonus I Monophthalmus successfully sieged the city after one year. It was later retaken by the Seleucid Empire and held until the 1st century BCE.

In 126 BCE the city of Tyre was more or less liberated by the Roman Empire from the Seleucids and given much of its former independence back. It was given the classification of a "civitas foederata" in 64 BCE when the territory of Phoenicia was turned into a Roman provence. Tyre would continue all throughout the Roman Empire Collapse which primarily affected the western portion of the empire centered around the city of Rome.

Tyre: repopulated with Greek emigrants and natives in 332/331, together with a permanent Macedonian garrison.