The Ptolemaic Kingdom, also known in Greek as Πτολεμαϊκὴ βασιλεία or Ptolemaïkḕ Basileía was a major kingdom during the Hellenistic Period that was founded in satrapy of Egypt following the death of Alexander the Great by his longtime friend and general named Ptolemy I Soter. The kingdom was responsible for many of Egypt's greatest accomplishments such as the completion of the city of Alexandria, which housed famous world wonders such as the Library of Alexandria, the Pharos Lighthouse, Cleopatra's Palace and many others. It would last all throughout the centuries until the death of Cleopatra VII and the conquering of Egypt by the Roman Empire.

Being Greek outsiders to the Egyptian throne, the successive descendants of the Ptolemic Dynasty of Egypt often had to fight local rebellions and civil wars in order to secure their rule and were involved in a long and brutal series of wars with the other Hellenistic Kingdom. One of the major series of wars was known as the Syrian Wars which ultimately played a role in the decline and collapse and annexation of the Ptolemaic Kingdom that culminated in the famous death of Cleopatra VII.

The Ptolemaic Kingdom was one of the best sources for Hellenistic culture as well as the preservation of Egyptian history and culture for future generations. Due to the Library of Alexandria there was a wealth of knowledge in both oral tradition as well as papyrus scrolls written in both the Greek language and Egyptian Hieroglyphs. These papyri scrolls are being still being discovered across Egypt which continually adds to our knowledge of the Greco-Egyptian cultural blend that occurred during this period.

Despite its collapse the influence of the Ptolemaic Kingdom and Hellenistic culture persevered all throughout the rise and fall of the Roman Empire, the Byzantine Empire and would last only until the conquest of the region by the Muslims.

During his campaign across the known world at the time, Alexander III the Great had managed to conquer Egypt following his Siege of Tyre and set about the motions to turn the civilization into a massive portion of his fledgling empire. He ordered the construction of the later completed city of Alexandria along with the Pharos Lighthouse before leaving with his army to finish conquering the rest of the Achaemenid Empire led by Darius III. After marching all the way across the world to the Himalaya Mountains had managed to carve out a massive empire for himself and his Macedonian compatriots.

After an exhausting campaign that took them to the furthest reaches of the known world at the time, Alexander decided to take his army back to the city of Babylon where the remaining Macedonian generals and officers could enjoy the fruits of their spoils. However, in the minds of some Alexander had no intention of ceasing his military campaign to conquer the world, and this caused much contention among his friends and previous commanders. While in the city Alexander died an extremely untimely and unexpected death which left the future of his empire in jeopardy.

His death kicked off a series of power struggles throughout the world at the time known as the Wars of the Diadochi which saw the fragmentation of Alexander's empire into various kingdoms. Throughout the Wars of the Diadochi the territory and boundaries of the kingdoms would shift until finally four major kingdoms emerged from the conflict. The Ptolemaic Kingdom was led by Ptolemy I Soter who was a childhood friend of Alexander and one of his major officers and generals. He ventured to Egypt to complete Alexander's dream for Egypt as well as start his own dynasty.

He ended up expanding the kingdom far beyond Egypt however, with his territory extending into southern Syria as well as to Cyrene in the north and Nubia in the south. Ptolemy helped legitimize his rule over Egypt by capturing Alexander's body on its way to the funeral and having him interred in Egypt. In doing this he declared him and his descendants the successors to the original semi-divine kings of Egypt. This gained them much popularity within the local population and in order to help assimilate further the Ptolemies adopted Egyptian customs and traditions and had themselves portrayed across monuments and sculptures in traditional Egyptian roles and clothing.

Following Alexander's death in Babylon in 323 BC,[6] a succession crisis erupted among his generals. Initially, Perdiccas ruled the empire as regent for Alexander's half-brother Arrhidaeus, who became Philip III of Macedon, and then as regent for both Philip III and Alexander's infant son Alexander IV of Macedon, who had not been born at the time of his father's death. Perdiccas appointed Ptolemy, one of Alexander's closest companions, to be satrap of Egypt.All the male rulers of the dynasty took the name "Ptolemy", while princesses and queens preferred the names Cleopatra, Arsinoe and Berenice. Because the Ptolemaic kings adopted the Egyptian custom of marrying their sisters, many of the kings ruled jointly with their spouses, who were also of the royal house.This custom made Ptolemaic politics confusingly incestuous, and the later Ptolemies were increasingly feeble. The only Ptolemaic Queens to officially rule on their own were Berenice III and Berenice IV. Cleopatra V did co-rule, but it was with another female, Berenice IV. Cleopatra VII officially co-ruled with Ptolemy XIII Theos Philopator, Ptolemy XIV, and Ptolemy XV, but effectively, she ruled Egypt alone.The early Ptolemies did not disturb the religion or the customs of the Egyptians, and indeed built magnificent new temples for the Egyptian gods and soon adopted the outward display of the Pharaohs of old. During the reign of Ptolemies II and III thousands of Macedonian veterans were rewarded with grants of farm lands, and Macedonians were planted in colonies and garrisons or settled themselves in the villages throughout the country.Upper Egypt, farthest from the centre of government, was less immediately affected, even though Ptolemy I established the Greek colony of Ptolemais Hermiou to be its capital. But within a century Greek influence had spread through the country and intermarriage had produced a large Greco-Egyptian educated class. Nevertheless, the Greeks always remained a privileged minority in Ptolemaic Egypt. They lived under Greek law, received a Greek education, were tried in Greek courts, and were citizens of Greek cities.

Ptolemy ruled Egypt from 323 BC, nominally in the name of the joint kings Philip III and Alexander IV. However, as Alexander the Great's empire disintegrated, Ptolemy soon established himself as ruler in his own right. Ptolemy successfully defended Egypt against an invasion by Perdiccas in 321 BC, and consolidated his position in Egypt and the surrounding areas during the Wars of the Diadochi (322–301 BC). In 305 BC, Ptolemy took the title of King. As Ptolemy I Soter ("Saviour"), he founded the Ptolemaic dynasty that was to rule Egypt for nearly 300 years.

The Ptolemaic Kingdom would reach its greatest heights under the leadership of Ptolemy II Philadelphus who managed to expand the borders of the kingdom all the way into Anatolia in 271 BCE. Upon his death the kingdom would be inherited by Ptolemy III Euergetes and the successive members of the Ptolemic Dynasty who were never quite able to maintain the status Ptolemy II had. Overtime the Ptolemaic Kingdom would lose territory to the Seleucid Empire in a series of wars known as the Syrian Wars.

The main settlement and capital of the Ptolemaic Kingdom was the Hellenistic port of Alexandria which Alexander III the Great had ordered constructed on the site of the previous settlement of Rhacotis on the shores of the Mediterranean Sea. The engineer commissioned to do this was Dinocrates and Alexander would never live to see the city constructed. This task would be left up to Ptolemy I Soter and the successive members of the Ptolemic Dynasty who built many great structures that were the envy of the ancient world. 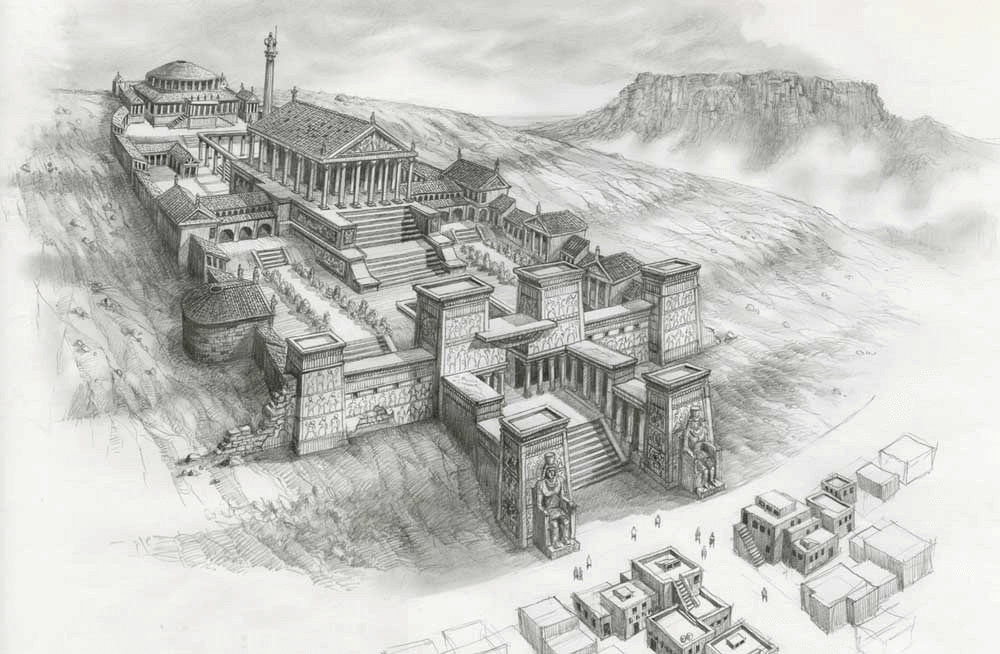 One of the main goals of the Ptolemic Dynasty was to create a massive center of learning and knowledge in the ancient world which became known as the Library of Alexandria. Here some of the greatest minds in the entire ancient world gathered, studied and shared ideas that greatly impacted our world today.

The Pharos Lighthouse was a massive lighthouse on Pharos Island which extended off the coast of Alexandria and served as a beacon for ships coming to the port. This lighthouse became known as one of the Seven Wonders of the Ancient World and along with the harbor helped Alexandria become a major Hellenistic port.

The Ptolemaic rulers often shared rule over the kingdom with their wives who were allowed to make decisions regarding the realm. Often their wives were their sisters and the queens held unusual amounts of power in the ancient world. Queens like Cleopatra VII ruled over the entire kingdom while others fought for rule and others carried out many regal decisions during their tenure. Overall the Ptolemies had a favorable view towards women and were very accepting of different cultures and religions.

Their religious tolerance is expressed in the native Greeks completely exchanging culture, ideas, knowledge and the reciprocation of this by the Egyptians, Jews, Nubians and many others throughout Mesopotamia that the Ptolemies engaged with. People of all nations, colors and creeds were encouraged to study at the famed Library of Alexandria and the Ptolemies encouraged trade and commerce as well, hoping to fufill Alexander's dream of creating the capital of the Mediterranean at the beautiful city of Alexandria.

Jones, Prudence J. (2006). Cleopatra: A Sourcebook. University of Oklahoma Press. p. 14. They were members of the Ptolemaic dynasty of Macedonian Greeks, who ruled Egypt after the death of its conqueror, Alexander the Great.

Pomeroy, Sarah B. (1990). Women in Hellenistic Egypt. Wayne State University Press. p. 16. while Ptolemaic Egypt was a monarchy with a Greek ruling class.

Bard, Kathryn A., ed. (1999). Encyclopedia of the Archaeology of Ancient Egypt. Routledge. p. 488. Ptolemaic kings were still crowned at Memphis and the city was popularly regarded as the Egyptian rival to Alexandria, founded by the Macedonian Greeks.

Bard, Kathryn A., ed. (1999). Encyclopedia of the Archaeology of Ancient Egypt. Routledge. p. 687. During the Ptolemaic period, when Egypt was governed by rulers of Greek descent.