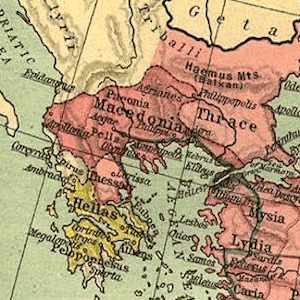 Next Battle: Battle of Mount Haemus

However, news of Philip II's death led many city-states to believe they could throw off the Macedonian yolk and thus began asserting their independence against the new king. These states included Thebes, Athens, Thessaly as well as some Thracian tribes to the north of Macedon itself. Alexander though, would have none of it.

He gathered his army of 3,000 cavalry and rode south towards Thessaly first. Here he found the Thessalian army blocking the route between Mount Olympus and Mount Ossa. This first attack against the Thessalian army would characterize Alexander's ingenuity and innovativeness for years to come. He ordered his soldiers to ride through while the enemy was sleeping and when they awoke they suddenly found the Macedonians at their rear. After seeing the Macedonian cavalry behind them the Thessalians surrendered and decided to join Alexander's cavalry force as he continued to ride south towards the Peloponnese.

Following this initial victory Alexander and company rode south to Thermopylae where he was recognized as leader of the Sacred League. From here he headed south towards Corinth. At Corinth he sued for peace and pardoned anyone involved with the rebellion. Upon this victory he was proclaimed Hegemon of the Greek forces to command against the Persian Empire. However, while down in Corinth he received word that the Thracian tribes in the north began rebelling as well.

Prior to crossing into Asia Minor, Alexander wanted to reinforce his northern borders and advanced initially into Thrace in the spring of 335 BC. The rebellion was led by the Illyrians and the Triballi that were vassals of the Macedonians prior to this.

The Siege of Pelium was a siege engaged by Alexander the Great to conquer the Illyrian tribes of modern day Albania. It was necessary for Alexander to capture this point as it provided easy access to both Illyria and Macedonia and he needed to move quickly to quash the Greece rebellion brewing in Athens and Thebes. The success of this siege would foreshadow much of the later success Alexander would have in his subsequent campaigns. After taking the city of Pelium the Macedonians would march south to quickly bring the rest of the Greek city-states within their control.

Following the destruction of Thebes the Macedonian vassal territories were once once again under the dominion of Macedon and thus Alexander. After conquering Greece and the rest of the tribes and territories he was free to undertake his planned Persian campaign which had been planned previously by his father.