Ptolemy I (367-283 BCE), also known as Ptolemy I Soter (savior), was a Macedonian general during the campaign of Alexander III the Great. Following the sudden and mysterious death of Alexander his empire broke apart and fragmented into various kingdoms during the Wars of the Diadochi. During this time Ptolemy seized the civilization of Egypt and established a Hellenistic dynasty that would last until being ousted by the Roman Empire. 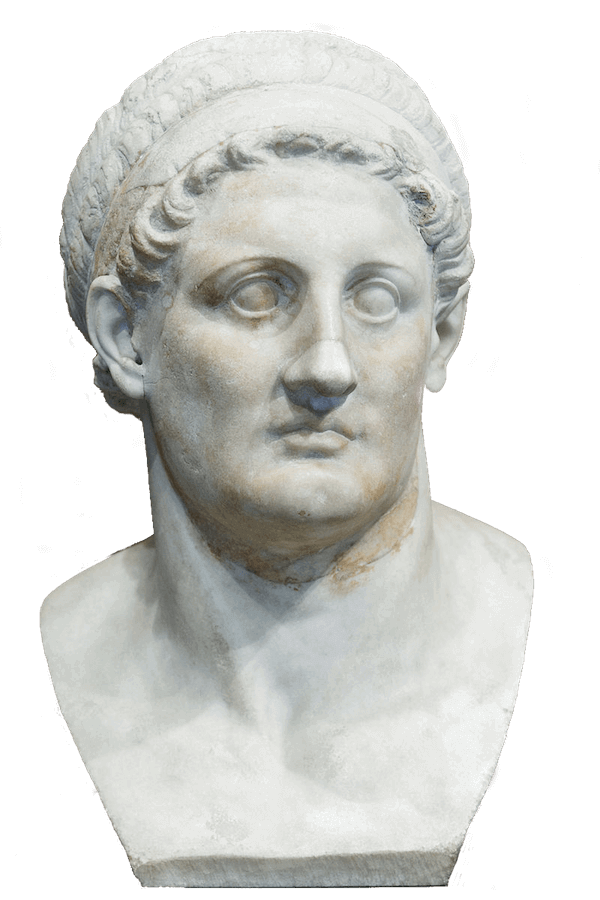 Ptolemy I was famous for seeing through the construction of the city of Alexandria that was started by Alexander before him and was responsible for ushering in a new golden age in Egyptian society that revitalized the long impoverished great ancient civilization.

He died in 283 BCE and would pass on rule to his son Ptolemy II who would continue his rule in Egypt and oversee the completion of many great projects in Alexandria such as the Library of Alexandria and the Pharos Lighthouse.

Ptolemy was born to a Macedonian women named Arsinoe and an unnamed father. Some ancient sources believe he was the son of a local nobleman named Lagus or was an illegitimate son of Philip II of Macedon which would make him genetically related to Alexander if true. Others believe this was a myth perpetuated to help add credibility to the Ptolemy dynasty in Egypt. Regardless, Ptolemy I was a childhood friend of Alexander as well and was educated with the other companions at Aristotle's school and became one of his most trusted generals and officers.

Ptolemy was a few years older than Alexander and came to comprise one of his seven somatophylakes or bodyguards.

Ptolemy served an officer role during the campaign of Alexander the Great from its earliest days. LPtolemy served with Alexander from his first campaigns, and played a principal part in the later campaigns in Afghanistan and India. He participated in the Battle of Issus and accompanied Alexander during his journey to the Oracle in the Siwa Oasis where he was proclaimed a son of Zeus.[2] Ptolemy had his first independent command during the campaign against the rebel Bessus whom Ptolemy captured and handed over to Alexander for execution.[3] During Alexander's campaign in the Indian subcontinent Ptolemy was in command of the advance guard at the siege of Aornos and fought at the Battle of the Hydaspes River.

When Alexander died in 323 BC, Ptolemy is said to have instigated the resettlement of the empire made at Babylon. Through the Partition of Babylon, he was appointed satrap of Egypt, under the nominal kings Philip III Arrhidaeus and the infant Alexander IV; the former satrap, the Greek Cleomenes, stayed on as his deputy. Ptolemy quickly moved, without authorization, to subjugate Cyrenaica.By custom, kings in Macedonia asserted their right to the throne by burying their predecessor. Probably because he wanted to pre-empt Perdiccas, the imperial regent, from staking his claim in this way, Ptolemy took great pains in acquiring the body of Alexander the Great, placing it temporarily in Memphis, Egypt. Ptolemy then openly joined the coalition against Perdiccas.[4]Perdiccas appears to have suspected Ptolemy of aiming for the throne himself, and may have decided that Ptolemy was his most dangerous rival. Ptolemy executed Cleomenes for spying on behalf of Perdiccas — this removed the chief check on his authority, and allowed Ptolemy to obtain the huge sum that Cleomenes had accumulated.[4]

In 321 BC, Perdiccas attempted to invade Egypt only to fall at the hands of his own men.[5] Ptolemy's decision to defend the Nile against Perdiccas's attempt to force it ended in fiasco for Perdiccas, with the loss of 2000 men. This failure was a fatal blow to Perdiccas' reputation, and he was murdered in his tent by two of his subordinates. Ptolemy immediately crossed the Nile, to provide supplies to what had the day before been an enemy army. Ptolemy was offered the regency in place of Perdiccas; but he declined.[6] Ptolemy was consistent in his policy of securing a power base, while never succumbing to the temptation of risking all to succeed Alexander.[7]In the long wars that followed between the different Diadochi, Ptolemy's first goal was to hold Egypt securely, and his second was to secure control in the outlying areas: Cyrenaica and Cyprus, as well as Syria, including the province of Judea. His first occupation of Syria was in 318, and he established at the same time a protectorate over the petty kings of Cyprus. When Antigonus One-Eye, master of Asia in 315, showed dangerous ambitions, Ptolemy joined the coalition against him, and on the outbreak of war, evacuated Syria. In Cyprus, he fought the partisans of Antigonus, and re-conquered the island (313). A revolt in Cyrene was crushed the same year.

In 312 BCE a joint coalition between Ptolemy I and Seleucus I Nicator oversaw the invasion of Coele-Syria where they defeated the son of Antigonus I Monophthalmus named Demetrius Poliorcetes known as the 'besieger of cities' in the famous Battle of Gaza.

At this point Seleucus had been exiled from his satrapy of Babylonia and had allied with the Ptolemaic Kingdom to reclaim his territory. However, after only a few months Coele-Syria was lost to a force led by both Demetrius and Antigonus. Following this peace was concluded in 311 BCE however, soon on the orders of Cassander the infant king of Macedonia named Alexander IV was murdered. This led to the elimination of any claim to the empire that Alexander the Great had established and left Ptolemy legitimately in control over the satrap of Egypt and ultimately his fledgling Ptolemaic Kingdom.

Peace between the Diadochi did not last long and in 309 BCE Ptolemy I launched an invasion of the coastal cities of Lycia and Caria that were controlled by Antigonus. Following this he campaigned right into Greece where he conquered the cities of Corinth, Sicyon, and Megara in 308 BCE.

However, this prompted a counter attack by Antigonus and in 306 BCE a massive fleet led by Demetrius attacked the Ptolemaic stronghold of Cyprus and in the ensuing battle Ptolemy's brother named Menelaus would be captured and the Ptolemaic military defeated in the Battle of Salamis. Following this Antigonus took possession of Cyprus from Ptolemy.

The satraps Antigonus and Demetrius now each assumed the title of king; Ptolemy, as well as Cassander, Lysimachus and Seleucus I Nicator, responded by doing the same. In the winter of 306 BC, Antigonus tried to follow up his victory in Cyprus by invading Egypt; but Ptolemy was strongest there, and successfully held the frontier against him. Ptolemy led no further overseas expeditions against Antigonus. However, he did send great assistance to Rhodes when it was besieged by Demetrius (305/304). Pausanias reports that the grateful Rhodians bestowed the name Soter ("saviour") upon him as a result of lifting the siege. This account is generally accepted by modern scholars, although the earliest datable mention of it is from coins issued by Ptolemy II in 263 BC.When the coalition against Antigonus was renewed in 302, Ptolemy joined it, and invaded Syria a third time, while Antigonus was engaged with Lysimachus in Asia Minor. On hearing a report that Antigonus had won a decisive victory there, he once again evacuated Syria. But when the news came that Antigonus had been defeated and slain by Lysimachus and Seleucus at the Battle of Ipsus in 301, he occupied Syria a fourth time.

The other members of the coalition had assigned all Syria to Seleucus, after what they regarded as Ptolemy's desertion, and for the next hundred years, the question of the ownership of southern Syria (i.e., Judea) produced recurring warfare between the Seleucid and Ptolemaic dynasties. Henceforth, Ptolemy seems to have mingled as little as possible in the rivalries between Asia Minor and Greece; he lost what he held in Greece, but reconquered Cyprus in 295/294. Cyrene, after a series of rebellions, was finally subjugated about 300 and placed under his stepson Magas.

Ptolemy personally sponsored the great mathematician Euclid, but found Euclid's seminal work, the Elements, too difficult to study, so he asked if there were an easier way to master it. According to Proclus Euclid famously quipped: "Sire, there is no Royal Road to geometry."[11]

Ptolemy I was one of the few kings in the ancient world to be able to retire with his kingdom in a state of prosperity and peace that would last for several hundred years. In 289 BCE he chose his son Ptolemy II and his wife Berenice I to co-rule the Ptolemaic Kingdom while he enjoyed retirement.

His eldest (legitimate) son, Ptolemy Keraunos, whose mother, Eurydice, the daughter of Antipater, had been repudiated, fled to the court of Lysimachus.Ptolemy also had a consort in Thaïs, the Athenian hetaera and one of Alexander's companions in his conquest of the ancient world.

While in retirement Ptolemy I wrote a history of the campaign of Alexander III the Great. This would become one of his greatest legacies as it was long considered a very un-biased and objective account of the campaign. While the primary source document of Ptolemy's history has not survived to be passed down to us, the famous Roman historian named Arrian of Nicomedia used it heavily to complete his famous and widely read work.

At the age of 84 in 283 BCE Ptolemy I died leaving behind a rich legacy that would forever leave a mark on the understanding of ancient Greek and Egyptian culture and history. Being one of Alexander the Great's personal bodyguards meant that he was able to see the entire known world at the time and lived a long life full of adventure, turmoil and war. An intelligent and capable ruler, Ptolemy I built the Ptolemaic Kingdom out of the fragmentation of Alexander's empire during the Wars of the Diadochi.

Easily the most capable and benevolent ruler of the Hellenistic Era, the Ptolemaic Kingdom was a beacon for learning, discovery and science and did the most to carry on the vision and dreams originally set forth by Alexander the Great during their long military campaign so many decades previously. In the efforts made by Ptolemy I to secure the body of Alexander as well as his contributions to the completion of the city of Alexandria it is to say he was the one Diadochi most concerned with continuing on with the rightful heirs plans while the others chose personal benefit and gain.

Overall the kingdom that Ptolemy left to his successors was well ordered and consolidated following the nearly four decades of the Wars of the Diadochi. He was known to allow native Egyptians and Africans as well as Macedonians into the Ptolemaic army and was a responsible and successful military commander as well as an intellectual.