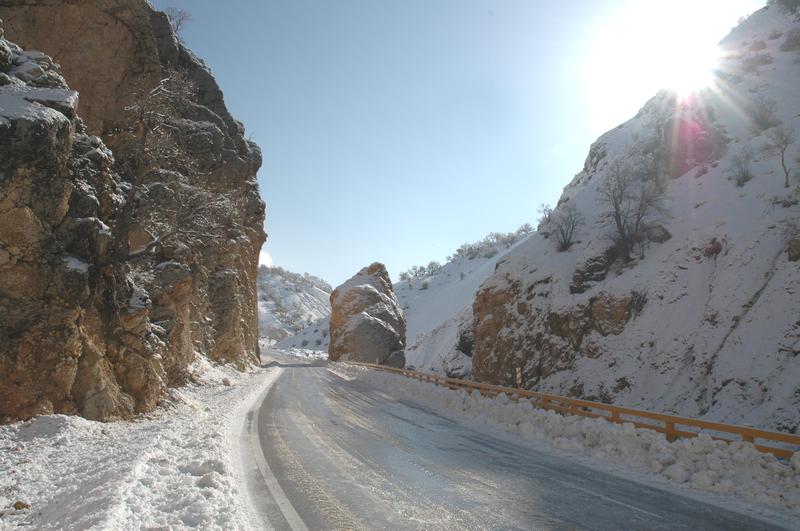 Next Battle: Siege of Cyropolis

The Battle of the Persian Gate was a military engagement that occurred in the winter of 330 BCE between the Macedonians and the Achaemenid Empire during the Persian Campaign of Alexander III the Great. Prior to this the Macedonians had been extremely effective in their military campaign and achieved victory after victory including the decisive Battle of Guagamela, and the Battle of Issus. They had successfully routed most of the Persian forces and forced the complete retreat of Darius III and the collapse of the Achaemenid Empire.

By 331 BCE Alexander had marched all the way to Babylon and Susa using the Persians own Royal Road against them to aid their mobility and enable massive troop movement between Alexander's growing Empire. During this time the satrap of Persis named Ariobarzanes was ordered to make a strategic defense of Persia using the forces under his command. He relied heavily on geography to accomplish his defense and the ensuing battle was eerily similar to the Battle of Thermopylae and occurred in a funnel area at one of the few passes over the Zagros Mountains and was responsible for a month long battle between the forces.

Following the capture of Susa the Macedonian army split into two regiments in order to operate more effectively. One half of the army would be led by Alexander and would approach Persis while the other half led by Parmenion would continue on the Royal Road. Despite having dispatched the Uxians in what is known as the Battle of the Uxian Defile, Alexander did not see the upcoming ambush that Ariobarzanes had set for him. He encountered no Persian troops along the route to Persis so his complacency led him to neglect sending scouts ahead to check the route. He walked right into the trap and was soon locked in a bitter conflict.

In keeping with the infamous Spartan last stand before a path behind the Persian forces was revealed by either spies, captured prisoners or a local farmer or Shepard. Using this information the Macedonian forces approached from behind and achieved victory over the final Persian forces. Following this Alexander would move onto siege and capture many of the major territories and cities around the Persian Empire. His next move was to move to the city of Cyropolis and in 329 BCE he captured it in what became known as the Siege of Cyropolis.

The battle was fought at a location known as the Persian Gate which was a very treacherous mountain pass in the Zagros Mountains. Moving a massive army was no easy feat through the mountains and therefore it was easy for the Persians to set up their ambush. The area before the Persian Gate is wide valley known as Tang'e Meyran which allowed the Macedonians to approach the mountain in a full marching formation. However, soon the road narrowed to the southeast towards the rising sun and then got considerably more narrow and dangerous. At the most narrow point it was only a couple of meters across, wide enough for only a few men.

Using his forces estimated around 4,000 infantry and 700 cavalry it was here that Ariobarzanes managed to hold off the invading Macedonian force of over 10,000. According to some sources such as the Encyclopædia Iranica there was only between 700 soldiers and even others say there was only 2,000. Regardless the Persians were able to stave off for an entire month a massive invading Macedonian force many times their size. As soon as the Macedonian soldiers began their march through the ambush sector the Persians began dropping boulders, rocks and other missiles on them from above on the northern slope. From the southern slope the Persian archers rained down arrows and all sorts of other projectiles onto the soldiers.

The first onslaught was brutal against Alexander and he lost scores of soldiers in the ambush. His initial soldiers were massacred and as he attempted a retreat they ran into the still advancing soldiers of the rear. This caused massive chaos and disorder within the ranks and made an orderly retreat extremely difficult. In one of his biggest moral and ethical losses he was forced to leave the dead soldiers behind in order to save the rest of his forces. This was extremely disgraceful in Greek and Macedonian culture as dying on the battlefield was one of the highest honors and proper recovery and burial of the fallen was very important.

At this point Ariobarzanes believed he could hold off Alexander at the Persian Gate and prevent him from advancing anymore towards the Persian heartland and the capital at Persepolis. Even if the Macedonians were not fully repulsed from Asia at least this would all buy Darius III some time to assemble another army and turn the tide of the war. Ariobarzanes was able to hold off the pass for one month but eventually the Macedonians circled the Persian army using a pincer attack with Philotas and broke the Persian defenses.

Alexander and his elite cavalry and soldiers then launched a surprise attack on the Persians from above and they were forced to retreat and give up the mountain pass. According to the Roman historians Curtius and Arrian it was captured prisoners of war that led Alexander to through the mountains to get behind the Persians. A smaller force was left under the command of Craterus that stayed behind in the Macedonian camp to disguise the movements of the elite soldiers.

"[The Persians]...Fought a memorable fight... Unarmed as they were, they seized the armed men in their embrace, and dragging them down to the ground... Stabbed most of them with their own weapons."

This account is corroborated by Diodorus and Plutarch however, the casualties vary between accounts. Some historians believe that this battle represented the largest loss Alexander faced during his Persian campaign. There are various accounts as well of the battle itself. For example some historians say that Ariobarzanes and the remnants of the Persian camp were trapped but rather than surrender they charged out head first into the enemy lines.

One historical account suggests Ariobarzanes was killed in that final charge while Arrian states that he escaped northbound and eventually surrendered to Alexander after a pursuit. Modern historians such as J. Prevas states that Ariobarzanes ended up retreating to Persepolis. However, they found the gates to the city closed by Tiridates who was a Persian noble and guardian of the royal treasury under Darius III. Tiridates had been in secret communication with Alexander and understand the impending fate of the Achaemenid Empire. Instead of resist the Macedonians the Persian noble turned Ariobarzanes over to Alexander who massacred the Persian remnants in front of the walls of Persepolis.

The defeat of Ariobarzanes and the last holdout of Achaemenid forces removed the final defense between the Macedonian army and the Persian capital at Persepolis, holding all of the wealth of the world ripe for the taking. Following this Alexander's army would march towards Persepolis where the city would surrender without a fight, realizing the futility of the endeavor at this point. He would seize the treasury and capture the city, replacing the position of Ariobarzanes with a general named Phrasaortes.

At this point Darius III was still on the loose and needed to be hunted down. However, four months following the Battle of the Persian Gates the Macedonian army was responsible for one of the worst atrocities of all the campaign. Despite the Persian surrender the Macedonians slaughtered all of the men in Persepolis and enslaved all of the woman, possibly as a perceived expectation of revenge for centuries of Persians doing the same to Greeks.

Many historians do note this act was unusual for Alexander who normally displayed much restraint and honor in his capture of the Persian Empire. Previous major capitals such as Susa, Babylon and Ecbatana were not massacred and it is unknown the reasoning why the vicious crimes started here. They could also have been going on all along without much mention. However, what occurred next in May of 330 BCE ensured the animosity of the Persians when Alexander and his forces set fire to the beautiful terraces and palace at Persepolis and burned it to the ground before he left to finish off what he started out to do.

Some believe that Alexander was coerced into doing it, others believe it was revenge for the burning of the Acropolis at Athens in the Second Greco-Persian War. Some believe it may have been a drunken act or maybe out of rage that he was not immediately recognized as the legitimate successor to Darius III since he was still alive.

Many historians both modern and ancient note the crazy similarities between the famous Battle of Thermopylae fought over a hundred years prior in 480 BCE between the Persians and the Spartans. Its almost a complete reversal as before the outnumbered Spartans managed to hold the invading Persians off at a strategic geographic point. Here the Persians were forced into the same situation and the outcome was the same.

What makes it even more similar is the fact that a Shepard may have possibly given Alexander information on how to move behind the Persians and outflank them from the rear. The same event happened before when a local Greek gave information to the Persians about a small path around the territory they were defending. Some believe that prisoners of war or spies revealed the information and that this story was embellished to add more similarities to the very famous Battle of Thermopylae.