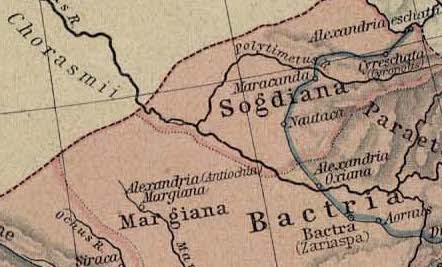 Next Battle: Battle of Jaxartes

The city of Cyropolis was one of seven major cities within the satrapy of Sogdia (Sogdiana) that Alexander the Great targeted during his Persian campaign in 329 BC. Alexander dispatched Craterus with the instructions to;

"take up a position close to the town, surround it with a ditch and stockade, and then assemble such siege engines as might suit his purpose...."

The military strategy of the Macedonians was to keep the defenders of Cyropolis focused on their own defenses. The Macedonians also wanted to prevent any of the inhabitants from fleeing and requesting assistance from neighboring towns and regions.

Cyropolis was the seventh planned conquest in the region and beginning at Gazza, the Macedonians under Alexander conquered five of the settlements quickly within two days. During this bloody conquest many of the inhabitants were killed in the engagements. Finally, Alexander and the Macedonians arrived outside the well fortified city that supposedly had the best soldiers in the entire region.

Alexander opened his siege on Cyropolis utilizing his siege engines. While the primary assault was gong on he ordered some of his soldiers to sneak through a dried-up water course that traversed under the town's main hall. Alexander himself joined on this surgical strike and once they had snuck in they opened the gate to the city and allowed the rest of the main army to enter. The street to street fighting was brutal once the inhabitants of Cyropolis discovered the city had fallen and Alexander himself was injured with a blow from a rock that landed on his neck and head.

Craterus would be wounded by an arrow injury but eventually the city defenders were forced to retreat. Arrian believed that the defenders of Cyropolis numbered about 15,000 but over 8,000 of them were killed during the first phase of the assault. The rest of the remnant fled towards the central citadel of the city but eventually surrendered one day due to a lack of water and resources.

There are also differing accounts of what happened to Cyropolis as well. According to Arrian who cited Ptolemy the city surrendered right from the beginning however, Arrian also states that Aristobulus said the population of Cyropolis was massacred. Regardless, Alexander assumed control over Sogdia (Sogdiana) and the north-eastern reaches of the Achaemenid Empire.