Next Battle: Siege of Tyre

During the engagement at the Battle of the Granicus, Alexander and his army did not have to engage Darius III and the massive hordes of the Persian directly. At the time Alexander was not seen as a threat and it was thought in Persia his invasion was going to be short lived.

Darius III and his commanders were proved wrong for sure when Alexander emerged victorious at the Granicus and moved through all of Asia Minor which submitted peacefully as he marched through. The Persian Empire was not going to be so easily defeated however, and soon the stage was set for a showdown between Alexander and the leader of the Achaemenid Empire himself for the fate of all Asia.

The Battle of Issus would be a resonating victory for Alexander and directly force the Achaemenid Empire into the final struggle for its survival at the Battle of Guagemela after Alexander first conquered the Persian satrapies of Phoenicia and Egypt.

When Alexander won his decisive victory at the Granicus and marched through Asia Minor claiming every territory along the way this was viewed as a great insult to the Persian leaders and could not be allowed to stand. After first sending his general Memnon to tend with Alexander, Darius III himself decided it was time to supervise the destruction of Alexander.

Darius III was able to call upon troops from all corners of his empire, even a few mercenary Greeks from Asia Minor. 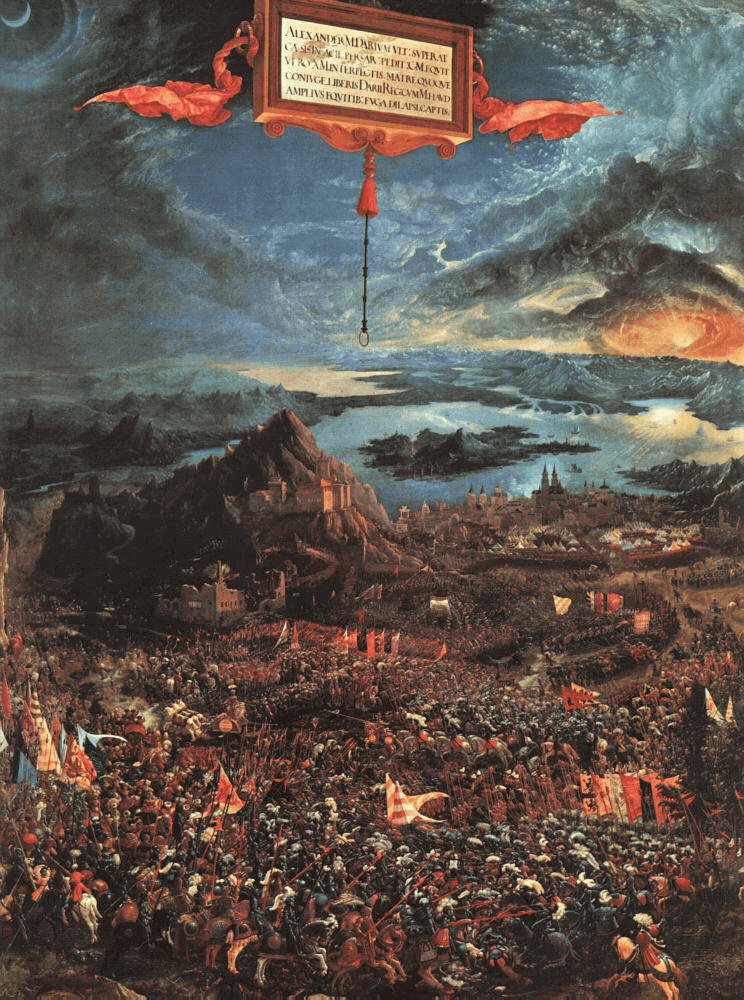 It will be observed by looking upon the map, that the chain of mountains called Mount Taurus extends down near to the coast, at the northeastern corner of the Mediterranean. Among these mountains there are various tracts of open country, through which an army may march to and fro, between Syria and Asia Minor. Now it happened that Darius, in going toward the west, took a more inland route than Alexander, who, on coming eastward, kept nearer to the sea. Alexander did not know that Darius was so near; and as for Darius, he was confident that Alexander was retreating before him; for, as the Macedonian army was so small, and his own forces constituted such an innumerable host, the idea that Alexander would remain to brave a battle was, in his opinion, entirely out of the question. He had, therefore, no doubt that Alexander was retreating. It is, of course, always difficult for two armies, fifty miles apart, to obtain correct ideas of each other's movements. All the ordinary intercommunications of the country are of course stopped, and each general has his scouts out, with orders to intercept all travelers, and to interrupt the communication of intelligence by every means in their power.In consequence of these and other circumstances of a similar nature, it happened that Alexander and Darius actually passed each other, without either of them being aware of it. Alexander advanced into Syria by the plains of Issus, marked a upon the map, and a narrow pass beyond, called the Gates of Syria, while Darius went farther to the north, and arrived at Issus after Alexander had left it. Here each army learned to their astonishment that their enemy was in their rear. Alexander could not credit this report when he first heard it. He dispatched a galley with thirty oars along the shore, up the Gulf of Issus, to ascertain the truth. The galley soon came back and reported that, beyond the Gates of Syria, they saw the whole country, which was nearly level land, though gently rising from the sea, covered with the vast encampments of the Persian army.The king then called his generals and counselors together, informed them of the facts, and made known to them his determination to return immediately through the Gates of Syria and attack the Persian army. The officers received the intelligence with enthusiastic expressions of joy. It was now near the evening. Alexander sent forward a strong reconnoitering party, ordering them to proceed cautiously, to ascend eminences and look far before them, to guard carefully against surprise, and to send back word immediately if they came upon any traces of the enemy. At the present day the operations of such a reconnoitering party are very much aided by the use of spy-glasses, which are made now with great care expressly for military purposes. The instrument, however, was not known in Alexander's day.When the evening came on, Alexander followed the reconnoitering party with the main body of the army. At midnight they reached the defile. When they were secure in the possession of it, they halted. Strong watches were stationed on all the surrounding heights to guard against any possible surprise. Alexander himself ascended one of the eminences, from whence he could look down upon the great plain beyond, which was dimly illuminated in every part by the smouldering fires of the Persian encampment. An encampment at night is a spectacle which is always grand, and often sublime. It must have appeared sublime to Alexander in the highest degree, on this occasion. To stand stealthily among these dark and somber mountains, with the defiles and passes below filled with the columns of his small but undaunted army, and to look onward, a few miles beyond, and see the countless fires of the vast hosts which had got between him and all hope of retreat to his native land; to feel, as he must have done, that his fate, and that of all who were with him, depended upon the events of the day that was soon to dawn—to see and feel these things must have made this night one of the most exciting and solemn scenes in the conqueror's life. He had a soul to enjoy its excitement and sublimity. He gloried in it; and, as if he wished to add to the solemnity of the scene, he caused an altar to be erected, and offered a sacrifice, by torch-light, to the deities on whose aid his soldiers imagined themselves most dependent for success on the morrow. Of course a place was selected where the lights of the torches would not attract the attention of the enemy, and sentinels were stationed at every advantageous point to watch the Persian camp for the slightest indications of movement or alarm.

In the morning, at break of day, Alexander commenced his march down to the plain. 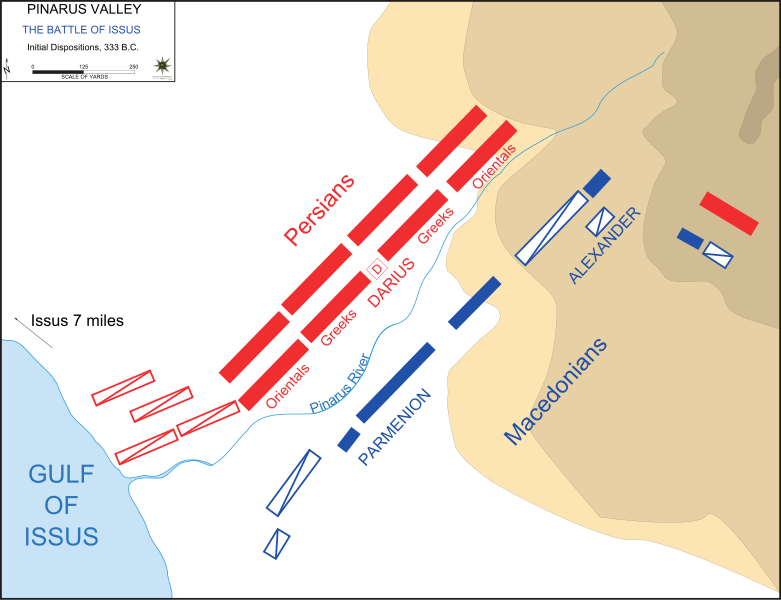 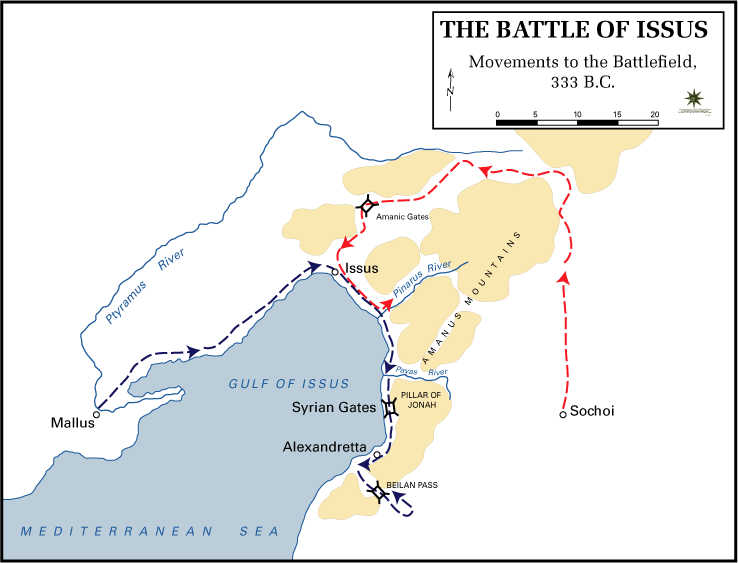 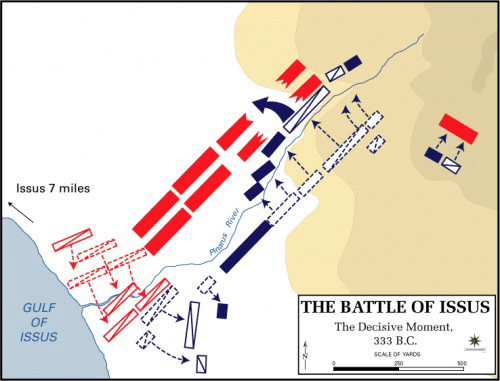 As Darius came closed to being killed the Alexander and the companion cavalry he immediately began a hasty retreat on his chariot, leaving behind his mother, wife and the rest of his family as he disappeared into then night. When the road ended and he could take the chariot no further, Darius mounted his horse and continued to run throughout the night.

After winning the Battle of Issus, Alexander did not need to chase Darius into the night as he was already done for. The Battle of Issus proved once again that Darius had underestimated his Greek foe and that was going to cost him dearly. As Caridemes said, the pomp and luxury of the army was going to be his undoing the relentless Greeks.

After the Battle of Issus it would be several years before Alexander and Darius would have their final showdown at the Battle of Gaugamela. However, after watching the Persian army scatter into the sunset, the Macedonians turned back towards the Persian camp in order to plunder all of its worth.

At the Persian camp Alexander and his army found all sorts of gold and silver objects along with valuable caskets, vases, perfumes, incenses and every other imaginable item of luxury. As Darius's mother, wife and family pondered their fates, Darius continued to flee for safe territory.

Ultimately Alexander would let Darius retreat and offered mercy towards his enemies family. While letting Darius amass his forces for the upcoming Battle of Guagamela, Alexander in the meantime focused his efforts on subduing the other territories of the Achaemenid Empire first.