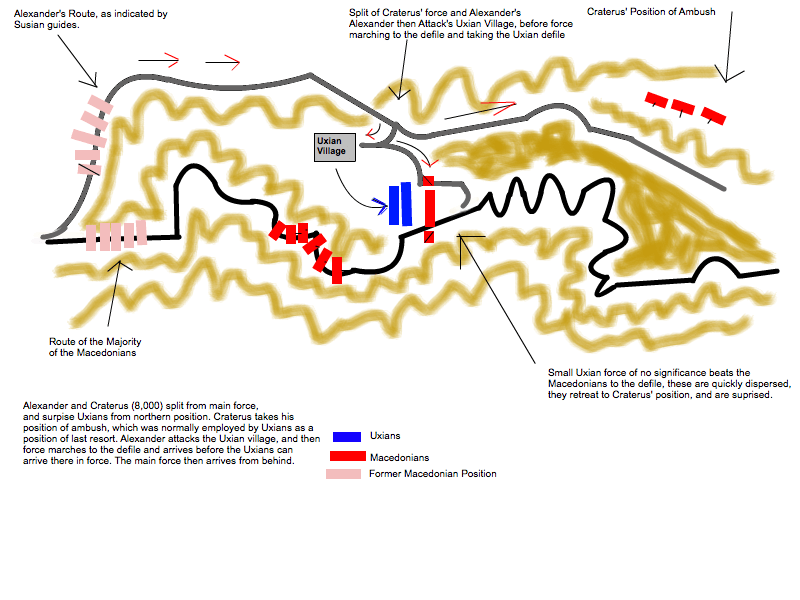 Territorial Changes: Conquest of the Uxians

Next Battle: Battle of the Persian Gate

The Battle of the Uxian Defile was an engagement fought between Alexander III the Great and the Uxian Tribe during his Persian Campaign. At a key mountain pass between the cities of Susa and Persepolis the Uxian Tribe demanded the same tribute that they had from the previous Persian kings to let them pass unimpeded. However, Alexander did not negotiate the same way and decided to dispatch the tribe with great efficiency.

Following the defeat of Darius III at the Battle of Guagamela, the Achaemenid forces were scattered and chaotic and without a leader. Darius III had fled the battle which forced Alexander to pursue him across Persian territory, capturing the most important cities along the way. He was swiftly able to move through Mesopotamia and enter the city of Babylon without a conflict due to the satrap Mazaeus.

Mazaeus was rewarded for this by retaining his position as satrap of the city and surrounding Babylonia. In Babylon the Macedonian troops rested and were paid with treasures from one of the greatest cities in the ancient world. Alexander decided to make Babylon his second capital and from there moved onto Susa which was the administrative capital of the Persian Empire in the winter.

Alexander rested his troops in Babylon for some days, and paid them amply with the treasures that were found there. In addition, he decided to set it up as a secondary base.[3] From here Alexander set out for Susa, the winter capital of the Persian Empire. It took him twenty days to reach this place,[4] from which there was 50,000[4] gold talents received (roughly equal to $538,000,000,000 USD in today's money). It was as a result of this that Alexander was able to send Antipater, the regent of Macedon, 3,000 gold [4] talents (about $32,280,000,000 USD in today's money) for the war against Sparta.[5] From Susa, Alexander marched towards the mountain defile.

Most of the tribes, kingdoms and other civilizations had managed to be subdued by the Persians however, the Uxians were especially tough to root out of their mountain stronghold. Instead the Persians just chose to pay them tribute whenever they needed to use the mountain pass. When the Uxians found out Alexander was coming they sent an envoy to give him the same message and terms. Alexander agreed and said he would approach on a given day with the agreed tribute.

The Uxians expected the Macedonians to travel via the main road and pay them the tribute before they passed. However, the same day they were supposed to arrive at the pass Alexander ordered Craterus, the shield bearing guards and around 8,000 other soldiers to occupy the high ground above the Uxians where they would be expected to retreat. Alexander then moved in with the rest of his forces and attacked their village, which forced their retreat right into his expecting allies hands. The Uxians were quickly defeated by the Macedonians who managed to capture the village and squeeze them between the two main fighting forces. Soon the battle was over and the Uxians were surrounded by the Macedonians who slaughtered them.

Following the massive defeat of the Uxians all of the remaining tribesman sued Alexander and the Macedonians for peace. They agreed instead to pay Alexander 100 horses, 500 beeves and 30,000 sheep every year as tribute for their resistance.