The Library of Pergamon, also known as the Library of Pergamum was a massive ancient library that was located at the Greek city of Pergamon located on the shores of Anatolia or modern day Turkey. At its height it was believed to have held over 200,000 scrolls according to ancient Roman historian Plutarch. 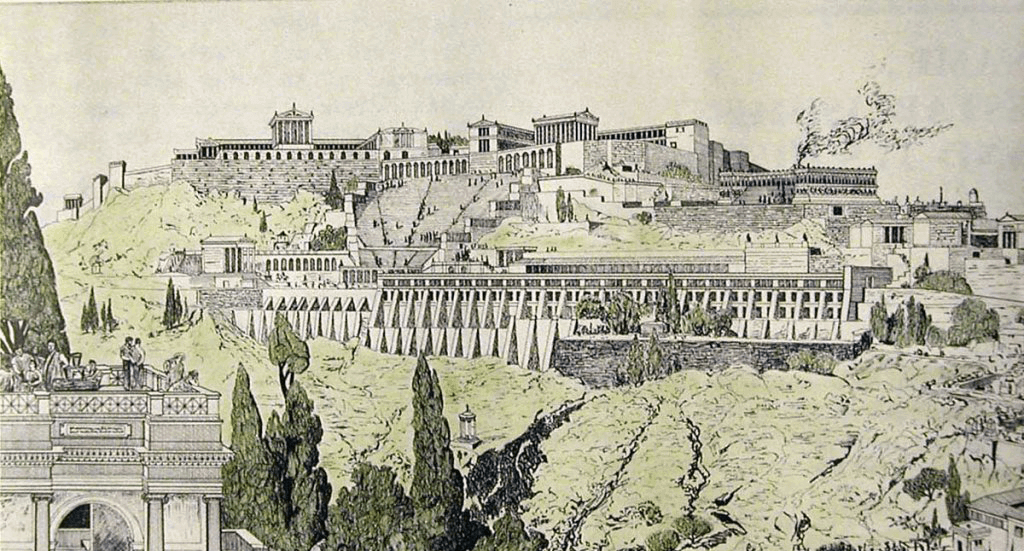 The city of Pergamon was founded before the conquest of Alexander III the Great by the Attalid dynasty. The city became more powerful under King Eumenes II who actually broke off relations with the Greeks and sided with the Romans. Due to this the city became very wealthy and many Roman-inspired works were produced during this time such as the Great Altar of Pergamon.

The Library of Pergamon was built by King Eumenes around 197-159 BCE and was located at the northern end of the Pergamon Acropolis. The library was stocked due to the efforts of Flavia Melitene who was the wife of a politician. She was also responsible for getting a statue of Roman emperor Hadrian that was to be placed within the library.

The library was designed around a large main reading room that contained many shelves. The shelves were built with space between the wall to allow air flow and better preserve the papyrus and parchment documents. In the center of the reading room stood a massive statue of Athena, the goddess of wisdom.

The city of Pergamon and its library were the first civilization to use the medium parchment to record works on. In fact, the city of Pergamon itself is credited with the invention of parchment, also known in the ancient times as charta pergamena. According to ancient accounts papyrus was only produced in Egypt that was controlled by Ptolemy I. Prior to the invention of parchment nearly all works were transcribed on papyrus as clay tablets had long since ceased in use.

When the Ptolemy's of Egypt one day refused to export anymore papyrus to a library that was threatening the hegemony of their own, the king took action. Eumenes II ordered that an alternative source for papyrus be invented. According to ancient accounts this alternative was made by a creating very thin sheets of sheep and goat skin that could be written on with ink.

The invention of parchment helped reduce Roman dependency on Egyptian papyrus and lessened their expenses of maintaining massive libraries. The invention of parchment was one of the major reasons for the success of the library and allowed works to be spread all throughout Europe and Asia due to its location in Asia Minor. You can see the prevalence of parchment today as it was key in the development of what is known now as paper

According to the legends, Mark Antony gave all 200,000 scrolls located at the Library of Pergamon to the Egyptian queen Cleopatra VII as a wedding present, ending the prominence of this great library in a single event.

Other legends suggest the volumes were moved to Alexandria to replace the scrolls that Julius Caesar destroyed during his siege of Alexandria. Regardless there is no index or global recording of the works kept at the Library of Pergamon so we have no idea what the true size of the library was, or what was contained within it. Upon the death of Attalus III who was the son of Eumenes II the city of Pergamon was given to the Roman Republic and eventually became part of the Byzantine Empire. Currently the city of Bergama in Turkey is located on the ruins of the city.

Currently the city of Bergama in Turkey is located on the ruins of the city.