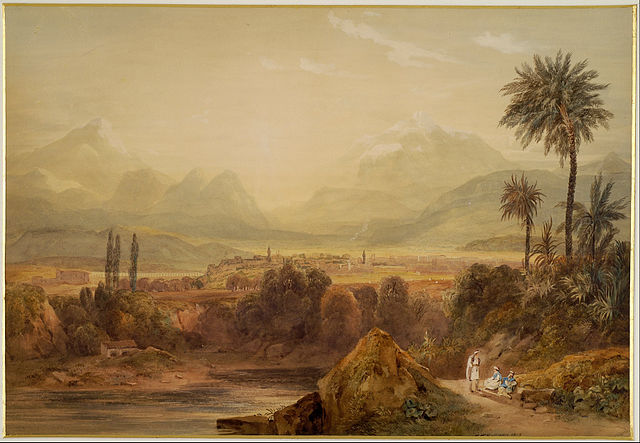 The Battle of Thebes was a battle between the Greek city of Thebes and Macedon under the command of Alexander III the Great in 335 BCE during his Balkan Campaign. The battle itself took place both outside and within the city itself.

Prior to this Alexander had been made Hegemon of the League of Corinth and had dealt with the revolts in Illyria at the Battle of Mount Haemus as well as in Thrace. To subdue these northern tribes Alexander needed to move soldiers that were maintaining Macedonian hegemony in southern Greece. The Thebians took advantage of this and rebelled against Alexander's rule.

Alexander sent several emissaries to request the city submit to him on peaceful terms. However, when the Thebians chose to continue resisting the Macedonians they destroyed the city. Alexander ordered the destruction of Thebes as a message to the other Greek city-states of the potential consequences. Thebes had been controlled by Macedon since the Battle of Chaeronea and was reluctantly made part of the League of Corinth.

The expedition against Persia had been long in the works, and Alexander did not make it a secret that he planned to avenge the attacks on Greece by Persia a century and a half before, despite that at the time his kingdom had been a Persian vassal state. It was as a result of this planned expedition that the Great King Darius III started to distribute money to the Greek city-states with the hope that they would rise against their new Hegemon. In addition to this, he had sent his most able general Memnon of Rhodes against the Macedonian troops that were already stationed in Ionia at this time.[2]In addition to this, news of Alexander had not reached the southern Greek city states for some time. He had been busy with the siege of Pelium and a rumour had reached them that he had died during the course of this siege. Demosthenes - a prominent Athenian politician - produced a man who claimed to have been present at the siege and claimed that Alexander was dead. Alexander had, indeed, been injured during this siege, so it was not a totally implausible claim to make.[2]

When Alexander learned of the revolt of Thebes, he was immediately concerned about the situation. He had only secured the allegiance of the city states at the beginning of his reign because he had an army present with which to bring the city states to terms. This time, there was no such army present in southern Greece. As a result, many cities were throwing off the Macedonian yoke.He therefore raced south, hitting Thessaly by the seventh day and Boeotia by end of the next week. Having marched over three hundred miles in two weeks.,[3] the Thebans were shocked to see him in such close proximity to them, and did not believe that it was in fact Alexander at all, contesting that it was Antipater.[3] He had passed through the pass of Thermopylae without any of the city states knowing about it.

Having arrived in Boeotia, many cities immediately deserted the cause of Greek independence and left Thebes to her own devices. Athens, being led by Demosthenes, an inveterate opponent of Phillip, was incited against Macedonian hegemony and voted to support Thebes. In spite of this moral support, and Demosthenes' having supplied the city with weapons, Athens held back their forces, deciding to await the course of events. In addition to this, the Spartans sent troops as far as the Isthmus of Corinth. However, they held back their forces upon learning of the King's arrival also.[1]

Alexander punished the Thebans severely for their rebellion. Wishing to send a message to the other Greek states, he had the 30,000 Thebans not killed in the fighting sold into slavery. The city itself was burnt to the ground.Upon learning of the alleged death of Alexander, Theban exiles in Athens raced off to their native city in Boeotia and sought to incite a revolt from Macedonian rule there. The Cadmaea, the citadel that was situated upon a hill in Thebes, was occupied by a Macedonian garrison, and it was this place that the Thebans sought to attack. To this effect, they killed two Macedonian officers who had been roaming the city, and declared their independence from Macedonia.