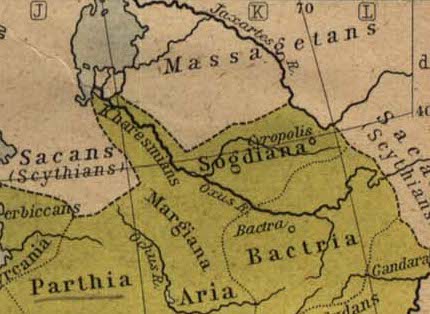 The Siege of Sogdian Rock or the Rock of Ariamazes was the name of an engagement in the early spring of 327 BC during Alexander's Indian Campaign that occurred in the northern portion of Bactria known as Sogdia (Sogdiana). Here the forces of Alexander III the Great managed to capture the fortress which was held by Oxyartes.

Oxyartes had previously send his wife and daughters, one of whom was Roxana to the citadel hoping it would be secure from the Macedonians on their conquest of the rest of the Achaemenid Empire. The Rock of Ariamazes contained enough food and supplies to withstand a prolonged siege and the Sogdians believed it to be impenetrable. As Alexander and the Macedonian Army approached they taunted the defenders and asked them to surrender. The Sogdians refused, telling the Greeks that they would need to grow wings in order to reach their citadel.

Alexander asked for volunteers, whom he would reward if they could climb the cliffs under the fortress. There were some 300 men who from previous sieges had gained experience in rock-climbing. Using tent pegs and strong flaxen lines, they climbed the cliff face at night, losing about 30 of their number during the ascent. In accordance with Alexander's orders, they signalled their success to the troops below by waving bits of linen, and Alexander sent a herald to tell the defenders that if they looked up, they would see that he had found his winged men. The defenders were so surprised and demoralized by this that they surrendered, even though they outnumbered the mountaineers by a hundred to one and Alexander's main force still had no way to reach the summit. The defenders had thought that the Rock was impregnable, and with one bold stroke Alexander showed them how wrong they were. The enemy's quick surrender validated Alexander's insightful use of psychological warfare.[1][2]

Following the capture of the fortress Alexander fell in love with Roxana. The Macedonians claimed she was the "the loveliest woman they had seen in Asia, with the one exception of Darius' wife". Following their victory here the Macedonians would advance into Parsetakene where they were supposed to find another fortress called the Rock of Chorienes. This too was quickly taken by the Greeks.

After this Alexander went to the siege Bactra where he was successful yet again. He would divert some of his troops under the command of Craterus to pacify the Parsetakene region after this victory. Alexander and the rest of the Macedonian army remained in Bactra while they plotted the next leg of their expedition across the Hindu Kush and into the rich lands of Indus Valley. While he was in Bactra he would marry Roxana.

The story of the Siege of Sogdian Rock can be traced back to the Roman historian named Arrian of Nicomedia who wrote about the engagement in his Anabasis (section 4.18.4-19.6). According to this historians such as P. J. Rhodes have pointed out this makes for a very busy year of 328 BCE and a pretty full 327 BCE very early. The historians propose accepting a second tradition the engagement happens in the summer of 328 BCE.