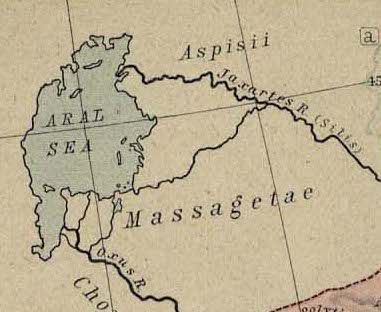 Next Battle: Siege of Sogdian Rock

The Battle of Gabai was a minor battle within the larger Persian Campaign of Alexander III the Great. It occurred near the city of Gabai in Sogdia (Sogdiana) between the last vestiges and remnants of the Achaememid Empire led by Spitamenes and the invading Macedonians led by Coenus. The battle was relatively small and only consisted of about ten thousand men in total, and occurred in the late autumn or early winter of 328 BCE.

The previous year in 329 BCE Alexander had rapidly invaded the Persian territory of Sogdiana. However, after conquering the territory he moved on which created a vacuum for a local leader named Spitamenes to take control and attack the soldiers Alexander had left stationed there to defend his interests. Spitamenes was joined by Sogdians as well as the Scythians and Massagetae from across the Oxus River. It is important to note that historians and archaeologists believe that the Oxus River may have been divereted, blocked or shifted path since the ancient times and used to flow east into the Caspian Sea instead of north into the Aral Sea.

In response to the uprising Alexander returned in 328 BCE to establish several fortified garrisons to establish security for the area. The previous hit and run guerrilla tactics of Spitamenes would no longer work against Alexander's troops so they decided to change strategy and engage the Macedonian forces in a full on battle. The battle and the history is described and recorded by Arrian of Nicomedia.

Coenus' winter camp was at Marakanda (Samarkand, Arrian, 4.16.3 and 4.17.3; Quintus Curtius 8.2.14), and so the battle was presumably someplace to its west. His force amounted to two taxeis of Macedonian pezetoiroi, his own and Meleager's, about 400 Companion cavalry, all the hippakontistai, and the Bactrians and Sogdians attached to Amyntas (Arrian 4.17.3).Each pezetairoi taxeis numbered 2000 men (see my Macedonian numbers and unit organisations for this), and the 400 Companions probably represent a single understrangth hipparchy (nominal strength 512 men, see the above notes), since we know that small numbers of Companions were scattered around the province in charge of the garrisoned strongholds (e.g. Arrian 4.16.6).The hippakontistai, or horsed javelinmen, recruited from Asiatics such as Paphlogonians, had by 330 BC grown to the size of a taxis (Arrian 3.24.1), but we are not told the strength of a taxis when it refers to horsemen. The Prodromoi, or Macedonian light horse, were at that stage still organised in four ilai, nominally 256 men strong, and as it seems they were absorbed into the Companons, with their role being taken by the akontistai, it is likely that the akontistai were at least as strong, if not more so. Since, unlike the Greek mercenaries (Arrian 4.4.6), they were seemingly not organised into hipparchies, perhaps they were 1000 strong (later they could be split in half, Arrian 4.24.1, so maybe they comprised two hipparchies).The Bactrians and Sogdians 'attached to Amyntas' are enigmatic. Since the horsemen the nearby Skythian Chorasmian king Pharasmenes had offered previously to Alexander were noted as being 1500 strong (Arrian 4.15.3), the number of Amyntas' men was presumably smaller; probably much smaller since Bactria and Sogdia were not yet pacified. I will make a guess at 500 all-told. Amyntas son of Andromenes, the phalanx taxiarch, had been killed recently (Arrian 3.27.3), so the Amyntas who soon would be left in charge of the large garrison of Bactria is no doubt meant (Arrian 4.22.3). This may be the Amyntas son of Arrabaeus who had previously (but not recently) commanded the Macedonian Prodromoi horsemen (Arrian 1.14.1).The Macedonians then, at the normal scale of 250 men per element, can be represented as:2 x Reg Kn (F) - the Companions8 x Reg Pk (O) - Coenus' battalion8 x Reg Pk (O) - Meleagers' battalion4 x Irr LH (O) - the Hippakontistai1 x Irr Cv (O) - the Bactrians1 x Irr LH (F) - the Sogdians2 x Irr Bg (I) - the baggage train (mobile)One element, of either Kn (F) or Pk (O), represents Coenus, and counts as the CinC. The force is too small to warrant the inclusion of Meleager or Amyntas as a sub-general. The Macedonians total 137 AP, and break on 8.Spitamene's forces were seemingly all mounted (4.17.5). In addition to his own Sogdians and Bactrians, he had pursuaded 3000 Massagetic Skythians to join him (Arrian 3.17.4). The numbers of Sogdians and Bactrians is unknown, but likely to be relatively small, only a short time before, a Macedonian force ofabout 100 cavalry had rashly attacked them as they were scattered about plundering, even though they were augmented by 600 Skythians at the time.I will estimate his forces as the following:1 x Irr Cv (O) - Spitamenes and his Sogdian followers3 x Irr Cv (I) - Sogdian colonist cavalry3 x Irr LH (F) - local Sogdians3 x Irr Cv (O) - Bactrians4 x Irr Bg (I) - the baggage train (mobile)3 x Irr Cv (S) - Massagetic nobles9 x Irr LH (F) - other Massagetic tribesmenSpitamenese counts as a sub-general (so does not get a CinC's PiP bonus); one of the Massagetic noble elements should also count as an ally-general. The Massagetae break on 4, the Sogdians on 4; the whole force breaks on 8 and amounts to 126 AP. The Messagetae can be unreliable, since Arrian states they joined to raid Sogdia, when it appears Spitamenes' intent was to instead force battle - they may not have been too happy to see Coenus' force!I have classified most of the Sogdians as colonist horse rather than nomads since Arrian refers to the 'line of battle' (4.17.4) which wouldn't be much of a line if virtually all the forces were light horse archers (as was the case with his Skythians, cf. Arrian 4.5.4)

The Macedonians lined up on the dry steppe facing west and the Sogdians and Massagatae faced them to the east. With the climate being that of dry, winter according to Arrian who suggested it did not snow until much later in the season (Arrian 4.21.10). Due to the previous battlefield experience of Spitamenes he was a master of guerilla and smaller warfare. According to Aristobolus previously Spitamenes had managed to ambush and defeat and entire column of around 2,300 Macedonian soldiers led by Pharnuces. The ensuing massacre was so brutal that only 300 of the soldiers managed to escape the bloodbath (Arrian 4.6.1). This meant that Spitamenes was effective with smaller scale ambush tactics and could be countered with a large scale army engagement which is exactly what the Macedonians were hoping for.

The outcome of the battle was decisively clear. The Macedonians had only lost about 40 soldiers under Coenus and managed to kill over 800 of the enemy. There was no way the guerrilla tactics of the Sogdians could match up to the phalanx strategy of the Macedonian army. Following this defeat the remaining Sogdians surrendered along with the Bactrians. The Scythians, Massagetae and Spitamenes himself managed to escape from the battle and looted the baggage train along the way.