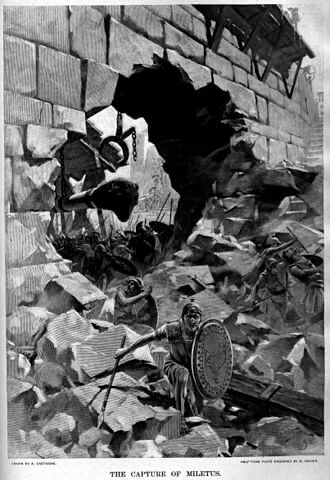 Next Battle: Siege of Halicarnassus

Previous Battle: Battle of the Granicus

The Siege of Miletus was one of the battles during the Persian Campaign of Alexander III the Great. It was one of his first early victories over the Achaemenid Empire and allowed the Macedonians to control over half of Ionia in Asia Minor (Anatolia). The city of Miletus was a city in the Greek kingdom of Caria and was previously a vassal state of the Achaemenid Empire.

Following the Battle of the Granicus, Alexanders forces had gained great momentum and began easily moving through Asia Minor. They would not have many problems along the way, however there were some hold outs of Persian forces and kingdoms still allied with the empire that Alexander would be forced to contend with. One of the major Persian vassal kingdoms was Caria which was known to have supported Persian many times in the past against Greece especially during the Greco-Persian Wars. One of the first targets after entering Asia was the city of Miletus.

The city was captured after a minor siege by the son of Parmenion named Nicanor in 334 BCE. The civilization of Caria was a minor naval power and allowed Alexander to begin acquiring the resources needed to take on the larger Persian Empire. Alexander would move on from here to the Siege of Halicarnassus which saw the capture of the capital of Caria known as Halicarnassus.