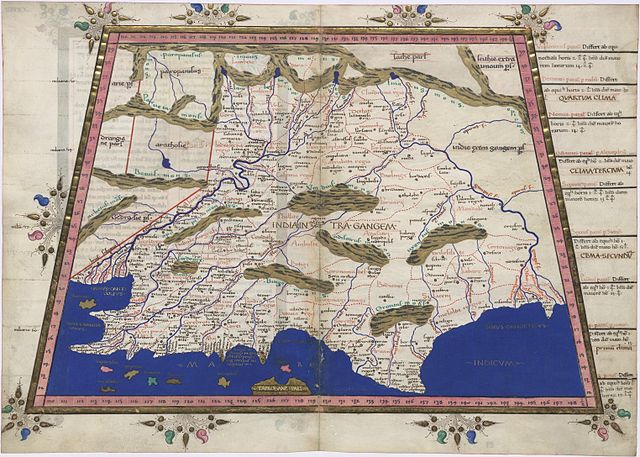 Aftermath: Macedonia conquers the Indus Valley, but fails to advance into the Ganges Plain.

The Indian campaign of Alexander the Great began in 326 BC. After conquering the Achaemenid Empire of Persia, the Macedonian king (and now the great king of the Persian Empire), Alexander, launched a campaign into the Indian subcontinent. The rationale for this campaign is usually said to be Alexander's desire to conquer the entire known world, which the Greeks thought ended in India.After gaining control of the former Achaemenid satrapy of Gandhara, including the city of Taxila, Alexander advanced into Punjab. The Battle of the Jhelum river against a regional Indian King, Porus, is considered by many historians, Peter Connolly being one of them, as the most costly battle fought by the armies of Alexander. Subsequently, his army refused to cross the Beas River, fearful of the powerful Nanda Empire which lay to the East along the banks of the Ganges. Therefore, Alexander turned south, advancing through southern Punjab and Sindh, along the way conquering more tribes along the lower Indus River, before returning into the west.While considering the conquests of Carthage and Rome, Alexander died in Babylon on June 10 or 11, 323 BC. In 321 BC, two years after Alexander's death, Chandragupta Maurya of Magadha founded the Maurya Empire in India.After the death of Spitamenes and his marriage to Roxana (Raoxshna in Old Iranian) in 326 BC to cement his relations with his new Central Asian satrapies, Alexander was finally free to turn his attention to India.[citation needed]Alexander invited all the chieftains of the former satrapy of Gandhara, to come to him and submit to his authority. Ambhi (Greek: Omphis), ruler of Taxila, whose kingdom extended from the Indus to the Jhelum (Greek: Hydaspes), complied. At the end of the spring of 327 BC, Alexander started on his Indian expedition leaving Amyntas behind with 3,500 horse and 10,000 foot soldiers to hold the land of the Bactrians.[1]

The KambojasMain articles: Alexander the Great and the Kambojas and Cophen Campaign"Victory coin" of Alexander the Great, minted in Babylon c. 322 BC, following his campaigns in the Indian subcontinent. Obverse: Alexander being crowned by Nike. Reverse: Alexander attacking king Porus on his elephant. Silver. British Museum.Alexander personally took command of the shield-bearing guards, foot-companions, archers, Agrianians, and horse-javelin-men and led them against the clans – the Aspasioi of Kunar valleys, the Guraeans of the Guraeus (Panjkora) valley, and the Assakenoi of the Swat and Buner valleys.[citation needed]Alexander faced resistance from Hastin (or Astes), chief of the Ilastinayana (called the Astakenoi or Astanenoi) tribe, whose capital was Pushkalavati or Peukelaotis.[2] He later defeated Asvayanas and Asvakayanas and captured their 40,000 men and 230,000 oxen. Asvakayanas of Massaga fought him under the command of their queen, Cleophis, with an army of 30,000 cavalry, 38,000 infantry, 30 elephants, and 7,000 mercenaries. Other regions that fought Alexander were Abhisara, Aornos, Bazira, and Ora or Dyrta.[3][4][5]After dealing with those tribes, Alexander crossed the River Indus and waged a war against King Paurava (or Porus). Arrian estimates the army of Porus at "30,000 foot, 4,000 horses, 300 chariots, and 200 elephants". At the battle of the Hydaspes river, Alexander defeated Porus and made him a satrap of the latter kingdom.[3]A fierce contest ensued with the Aspasioi, in the course of which Alexander himself was wounded in the shoulder by a dart, but eventually the Aspasioi lost the fight; 40,000 of them were enslaved. The Assakenoi faced Alexander with an army of 30,000 cavalry, 38,000 infantry, and 30 elephants.[6] They had fought bravely and offered stubborn resistance to the invader in many of their strongholds such as the cities of Ora, Bazira, and Massaga. The fort of Massaga could only be reduced after several days of bloody fighting in which Alexander himself was wounded seriously in the ankle. When the Chieftain of Massaga fell in the battle, the supreme command of the army went to his old mother, Cleophis, who also stood determined to defend her motherland to the last extremity. The example of Cleophis assuming the supreme command of the military also brought the entire population of women of the locality into the fighting.[7][8] Alexander was only able to reduce Massaga by resorting to political strategem and actions of betrayal. According to Curtius: "Not only did Alexander slaughter the entire population of Massaga, but also did he reduce its buildings to rubbles".[9] A similar slaughter then followed at Ora, another stronghold of the Assakenoi.

The Aornos is located to the north of Taxila, Pakistan. In the aftermath of general slaughter and arson committed by Alexander at Massaga and Ora, numerous Assakenians fled to a high fortress called Aornos (not definitely identified but somewhere between Shangla, in Swat, and the Kohistan region, both in northern Pakistan). Alexander followed close behind their heels and besieged the strategic hill-fort. The Siege of Aornos was Alexander's last siege, "the climax to Alexander's career as the greatest besieger in history", according to Robin Lane Fox.[10] The siege took place in April 326 BC.[11] It presented the last threat to Alexander's supply line, which stretched, dangerously vulnerable, over the Hindu Kush back to Balkh, though Arrian credits Alexander's heroic desire to outdo his kinsman Heracles, who allegedly had proved unable to take the place Pir-Sar, which the Greeks called Aornis. The site lies north of Attock in what is now the Punjab, Pakistan, on a strongly reinforced mountain spur above the narrow gorges in a bend of the upper Indus. Neighboring tribesmen who surrendered to Alexander offered to lead him to the best point of access.At the vulnerable north side leading to the fort, Alexander and his catapults were stopped by a deep ravine. To bring the siege engines within reach, an earthwork mound was constructed to bridge the ravine. A low hill connected to the nearest tip of Pir-Sar was soon within reach and taken. Alexander's troops were at first repelled by boulders rolled down from above. Three days of drumbeats marked the defenders' celebration of the initial repulse, followed by a surprise retreat. Hauling himself up the last rockface on a rope, Alexander cleared the summit, slaying some fugitives – inflated by Arrian to a massacre[12] – and erected altars to Athena Nike, Athena of Victory, traces of which were identified by Stein. Sisikottos, or Saśigupta, who had helped Alexander in this campaign, was made the governor of Aornos.

After reducing Aornos, Alexander crossed the Indus to begin campaigning in the Punjab region.

Asia in 323 BC, the Nanda Empire of Ancient India in relation to Alexander's Empire and neighborsEast of Porus's kingdom, near the Ganges River (the Hellenic version of the Indian name Ganga), was the powerful Nanda Empire of Magadha and the Gangaridai Empire of Bengal. Fearing the prospects of facing other powerful Indian armies and exhausted by years of campaigning, his army mutinied at the Hyphasis River (the modern Beas River), refusing to march further east.[16]Alexander's troops beg to return home from India in plate 3 of 11 by Antonio Tempesta of Florence, 1608As for the Macedonians, however, their struggle with Porus blunted their courage and stayed their further advance into India. For having had all they could do to repulse an enemy who mustered only twenty thousand infantry and two thousand horse, they violently opposed Alexander when he insisted on crossing the river Ganges also, the width of which, as they learned, was thirty-two furlongs, its depth a hundred fathoms, while its banks on the further side were covered with multitudes of men-at-arms and horsemen and elephants. For they were told that the kings of the Ganderites and Praesii were awaiting them with eighty thousand horsemen, two hundred thousand footmen, eight thousand chariots, and six thousand fighting elephants.— Plutarch's Lives[17]Gangaridai, a nation which possesses a vast force of the largest-sized elephants. Owing to this, their country has never been conquered by any foreign king: for all other nations dread the overwhelming number and strength of these animals. Thus Alexander the Macedonian, after conquering all Asia, did not make war upon the Gangaridai, as he did on all others; for when he had arrived with all his troops at the river Ganges, he abandoned as hopeless an invasion of the Gangaridai when he learned that they possessed four thousand elephants well trained and equipped for war.— Megasthenes, Indika[18]Alexander, using the incorrect maps of the Greeks, thought that the world ended a mere 1,000 kilometres (620 mi) away, at the edge of India. He therefore spoke to his army and tried to persuade them to march further into India, but Coenus pleaded with him to change his mind and return, saying the men "longed to again see their parents, their wives and children, their homeland". Alexander, seeing the unwillingness of his men, agreed and turned back.

Along the way, his army conquered the Malli clans (in modern-day Multan). During a siege, Alexander jumped into the fortified city with only two of his bodyguards and was wounded seriously by a Mallian arrow.[14] His forces, believing their king dead, took the citadel and unleashed their fury on the Malli who had taken refuge within it, perpetrating a massacre, sparing no man, woman or child.[19] However, due to the efforts of his surgeon, Kritodemos of Kos, Alexander survived the injury.[20] Following this, the surviving Malli surrendered to Alexander's forces, and his beleaguered army moved on, conquering more Indian tribes along the way.

Alexander sent much of his army to Carmania (modern southern Iran) with his general Craterus, and commissioned a fleet to explore the Persian Gulf shore under his admiral Nearchus while he led the rest of his forces back to Persia by the southern route through the Gedrosian Desert (now part of southern Iran) and Makran (now part of Pakistan). In crossing the desert, Alexander's army took enormous casualties from hunger and thirst, but fought no human enemy. They encountered the "Fish Eaters", or Ichthyophagi, primitive people who lived on the Makran coast of the Arabian Sea, who had matted hair, no fire, no metal, no clothes, lived in huts made of whale bones, and ate raw seafood obtained by beachcombing.[citation needed] During the crossing, Alexander refused as much water as possible, to share the sufferings of his men.

In the territory of the Indus, Alexander nominated his officer Peithon as a satrap, a position he would hold for the next ten years until 316 BC, and in the Punjab he left Eudemus in charge of the army, at the side of the satrap Porus and Taxiles. Eudemus became ruler of a part of the Punjab after their death. Both rulers returned to the West in 316 BC with their armies. In 321 BC Chandragupta Maurya of Magadha, founded the Maurya Empire in India and conquered the Macedonian satrapies during the Seleucid–Mauryan war (305–303 BC).