The Mausoleum at Halicarnassus was a massive structure built in the Greek city of Halicarnassus in the satrapy of Caria. Construction on the project began around 350 BC for the ruler, Mausolus (377-353 BCE) and his wife/sister Artemisia I of Caria who were the rulers of the independent kingdom of Caria. The Mausoleum was the focal point of the city and was about 148 feet or 45 meters tall and had magnificent sculptures and bas reliefs that adorned the four sides.

Travelers from all over the world through all ages ventured into Halicarnassus and marveled at the beauty of the structure and it is considered one of the Seven Wonders of the Ancient World. It survived the conquest of Alexander III the Great in 334 BC and pirates at the turn of the millennium. It stood until the 15th century when it was eventually destroyed.

This structure would become so famous in the ancient world that it is responsible for the use of the word "mausoleum" to describe any great tomb constructed by a leader or member of the elite. In fact, it was so renown throughout the ancient world that its design later went on to inspire the Mausoleum of Augustus Caesar and the Mausoleum of Hadrian.

In the 4th century BC the city state of Halicarnassus was the small capital of a kingdom in present day Turkey on the coast of the Mediterranean Sea. It was a small kingdom ruled by Hecatomnus of Milas who had a son named Mausolus. When Hecatomnus died, Mausolus inherited the kingdom of Caria and began to expand his control. Ultimately Caria was just a satrapy within the larger Achaemenid Empire but Caria was able to rule all of southwestern Anatolia and Rhodes with relative autonomy.

Mausolus married his sister and ruled for twenty four years before his death. Queens in Caria actually had unusual levels of power in the ancient world. Growing up in the same time period as Alexander III the Great, he was appreciative of Greek culture and even spoke Greek despite his ancestry as being from the Middle East. He ruled his cities with ideals of Greek democracy and designed many of his cities in accordance with Greek design. 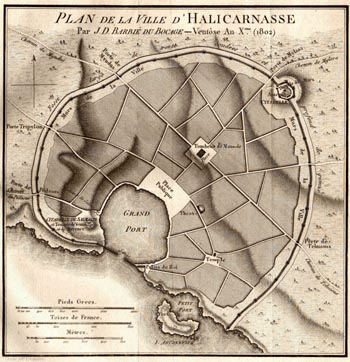 After conquering other cities and growing his empire, Mausolus decided to develop Halicarnassus into a more protected capital and began work enlarging the natural harbor and creating a break wall. This allowed his warships to easily defend the port from outside invasions. For the city itself Mausolus began developing city streets and built houses for the citizens. He built a massive palace for himself that offered views of all the surrounding areas from which enemies could approach. With his spoils of war Mausolus began construction on many public works projects such as walls, watchtowers, a Greek theater along with a massive Temple of Ares which paid homage to the Greek god of War.

In the midst of this building frenzy, Mausolus died in 353 BCE leaving his wife Artemisia I of Caria to rule over Halicarnassus and the empire. In order to honor her husband she ordered the construction of a massive tomb on a hill that overlooked the entire capital city. No expense was spared and she dispatched her people to find the best sculptors and artists in all of Greece to build the structure.

Artemisia hired the famed Scopas to create the Mausoleum. He was the perfect man for the job as he had also designed the Temple of Artemis at Ephesus. In addition to hiring four master craftsman for each of the walls, hundreds of other craftsmen and artisans were employed to help build the Mausoleum. It is believed that the idea for Mausoleum came from the Midas Mound that was in Gordium in 740 BCE. 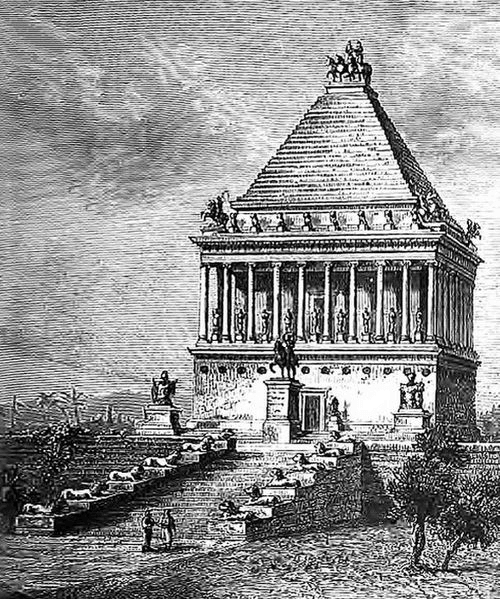 She only lived for two years after the death of Mausolus however, construction on the Mausoleum continued. The urns containing the ashes of the two were placed in the unfinished tomb along with a large number of dead animals given in sacrifice. The tomb was then sealed and the artisans began work to finish what their patron had started. According to Roman historian Pliny the Elder:

"Considering that it was at once a memorial of his own fame and of the sculptor's art."

The Mausoleum of Halicarnassus was built on a hill that overlooked the city. It was part of a massive structure that included a courtyard with fountains and gardens. Leading up to the tomb was a massive stairway that was guarded by stone lions. Along the walls were massive displays of pictures regarding everyday life, animals, battles and Greek culture. A few examples of these depict battles of centaurs and combat with Amazonian women.

According to the Roman historian Pliny the Elder in Natural History 36.30-31, the Mausoleum towered at 140 feet or 45 m and two sides measured 100 while the other two measured 120 ft. The circumference of the structure was 440 ft. Pliny's account is one of the only first hand accounts we have of the Mausoleum and its description. 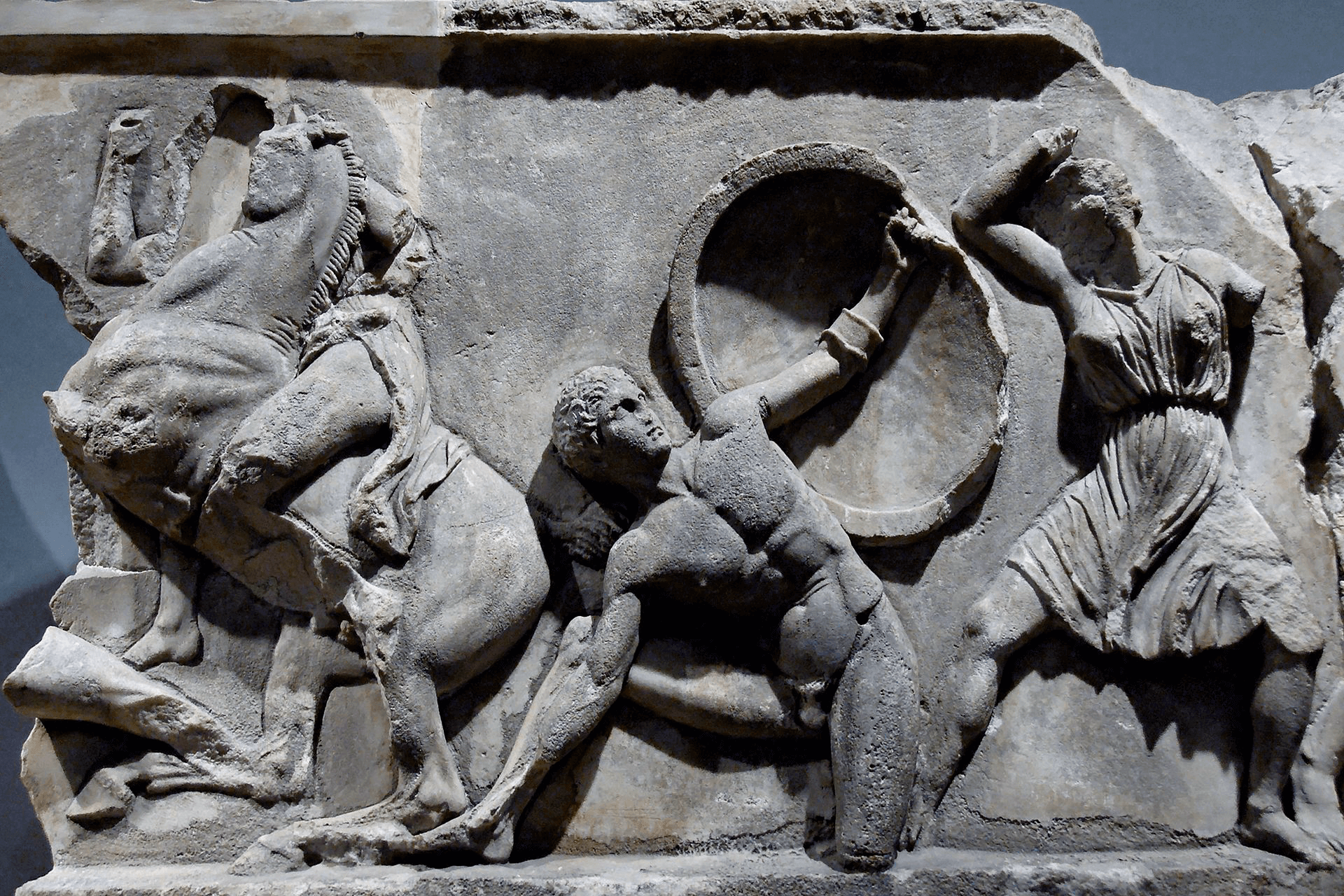 The height of the Mausoleum was broken up evenly between the base, the pillars and the roof. Each represented one third of the structure according to ancient historians. On top of the main section there stood thirty six columns, ten on each side of the structure with one extra column on each corner for support. Standing between each pair of pillars was a massive statue that stood over 3 m or 36 feet in height. On top of all this was a twenty-four stepped roof that was created in a pyramidal design. 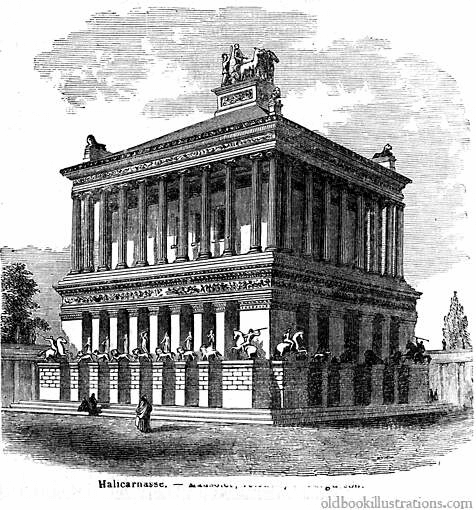 On top of the roof was a massive stone pedestal and bronze chariot that contained statues of Mausolus and Artemisia I of Caria riding inside of it. The chariot was pulled by four horses and was known as a quadriga in Greek culture. This structure was a very impressive creation and a testament to the great Greek builders. Unfortunately it would be one of the last great Structures created as the world began to transition into the Biblical age.

Originally designed by the Greek architects Satyros and Pythius of Priene they were to create a artistic and grand tomb for Mausolus and his wife. However, this type of building needed physical labor along with general managers so Leochares, Scopas, Bryaxis, and Timotheus were brought in to oversee construction on each of the sides. They each managed hundreds of craftsman to complete the task.

The finished result was something that every traveler for centuries marveled at. In fact the tomb for Mausolus and his family was so influential that the phrase "Mausoleum" has come to represent any above ground tomb. For this reason it would come to be known as one of the Seven Wonders of the Ancient World.

The Mausoleum at Halicarnassus was destroyed between the 12th century and 1402. It managed to survive so long despite so many other Structures being destroyed because the engravings were not those of Greek gods. Instead the sculptors created scenes of everyday life and animals which was not looked at by religion as being unholy.

The Mausoleum existed for centuries, long after the fall of Halicarnassus. After the bronze chariot on top its roof fell during an earthquake the Mausoleum slowly deteriorated over time and was eventually salvaged during the Crusades. The Mausoleum suffered a slower death than most of the other monuments and for that reason it is the most well documented in history.

During the Crusades the Mausoleum of Halicarnassus was destroyed and salvaged in order to fortify Bodrum Castle or the Castle of Saint Peter by the Knights of St. John. It was called Bodrum Castle because Halicarnassus was called Bodrum at this point by the Europeans. This important fortress was built by the Knights of St. John of Rhodes and between 1494 and 1522 they decided it needed fortification and began dismantling the Mausoleum. Many of the pieces of brilliantly sculpted marble can still be seen embedded in the walls of the castle today. 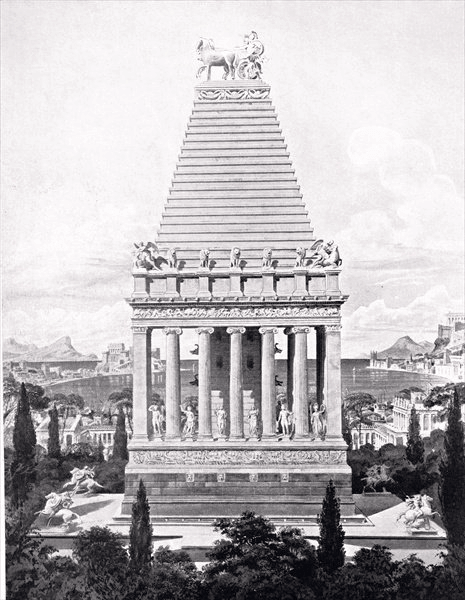 According to history, when the Knights were doing the fortification work they found the burial chamber containing a great coffin. The Knights decided to leave the coffin for the next day and when they returned they discovered all of the contents were gone. They believe it had happened during that previous knight, however archaeologists in the 1960's proved otherwise.

Archaeologists discovered that grave robbers had actually dug a tunnel underneath the Mausoleum and plundered it long before the Knights even arrived at Halicarnassus. The Knights also found no bodies because the remains were cremated and placed into urns. The name Bodrum for the city itself actually comes from this Castle and its subsequent structure. The Castle of St. Peter was originally called Petronium which eventually gave way to the Turkish interpretation, Bodrum. 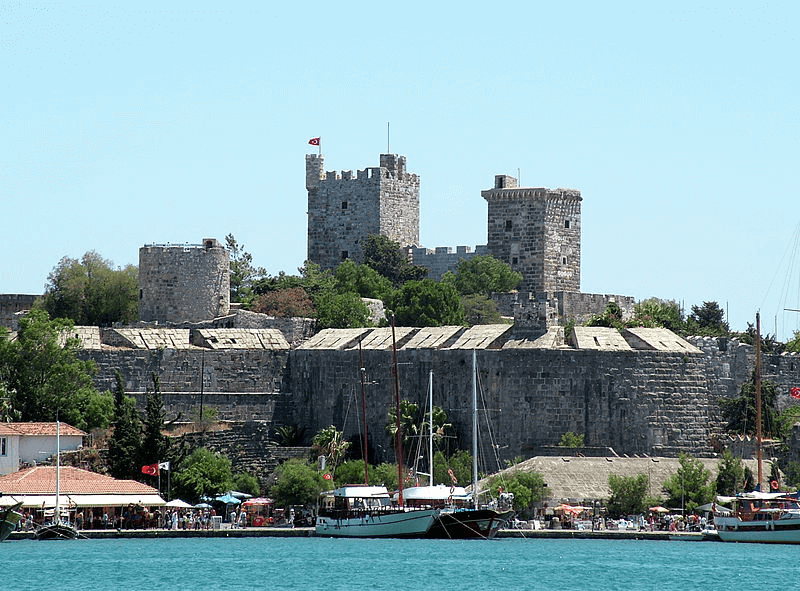 Dismantling the Mausoleum was not enough to fortify the castle and it was eventually overtaken by Suleiman I the Magnificent. The Knights of St. John Rhodes managed to flee the fortress and relocated first to Sicily and eventually to Malta where they became the Knights of Malta and established the Republic of Malta. They would later be forced out in 1798 during the Napoleonic Wars and now the Knights of St. Johns is reduced to a single office in the Vatican City.

This left Bodrum castle in control of the Ottoman Empire. Inside the castle remained some of the best works from the Mausoleum such as the bas reliefs and the columns embedded into the walls. They resided there for over three centuries after the Knights were forced to retreat. It remained in control of the Ottomans and became a sleepy fishing town where it still exists today in the modern country of Turkey.

During the 1800's there was a massive surge in archaeology and wanting to preserve the past by European cultures. In this effect the British Museum sent Charles Thomas Newton to buy up land and search for the remains of the Mausoleum. It was well known it was destroyed to make the Bodrum Castle and the remains were somewhere near town. However he could not just buy up the entire town as this would cost the Crown a fortune.

After meticulous research including some of the same sources we have used for this website such as Pliny the Elder, eventually Newton bought a piece of land and began excavating. After he dug down he soon began to discover walls, staircases and three corners of the foundation of the structure. Eventually he discovered massive lion statues that adorned the outer area of the Mausoleum. Assuming this was the long lost Mausoleum he bought the nearby land and soon began to discover even more. 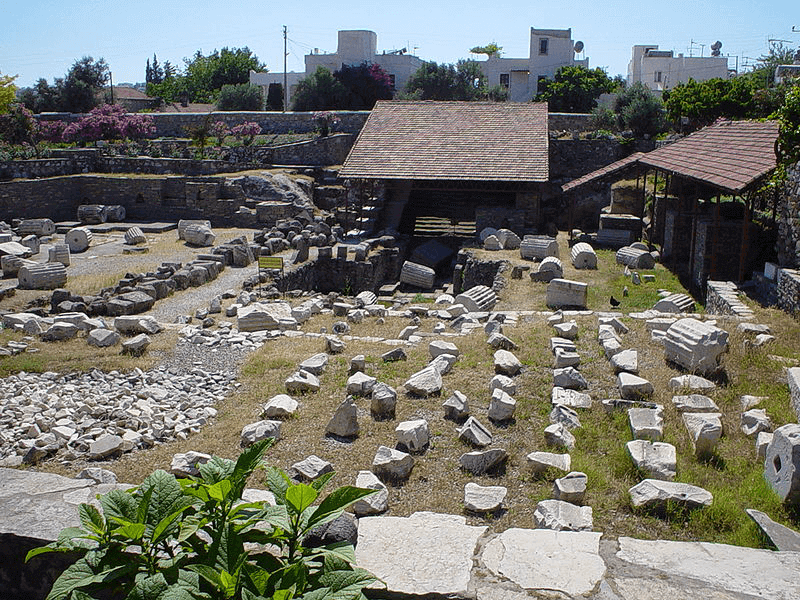 Next Newton began excavating the sections of the roof and pieces of the elaborate artwork that adorned the walls of the Mausoleum. He also discovered a massive, 6 foot, 7 inch (2m) broken stone chariot wheel that belonged to the one on the roof of the Mausoleum. He also discovered the statues of Mausolus and Artemesia that had guarded the building.

The next researcher to really look into the Mausoleum of Halicarnassus was Prof. Kristian Jeppesen of Aarhus University, Denmark. Between 1966 and 1977 Jeppesen wrote a six volume monograph called The Maussolleion at Halikarnassos.

There are a few surviving pieces of the Mausoleum of Halicarnassus today. Some of the sculptures that were excavated can be seen in the British Museum along with many fragments of the artwork that adorned the walls of the structure. Today the Bodrom Castle is the Museum for Underwater Archaeology and is a popular museum in Turkey. This museum was the brainchild of George Bas of the University of Pennsylvania Museum. 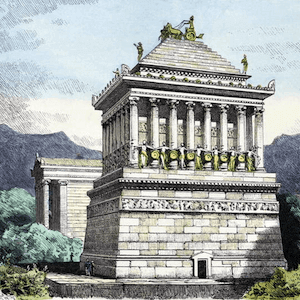 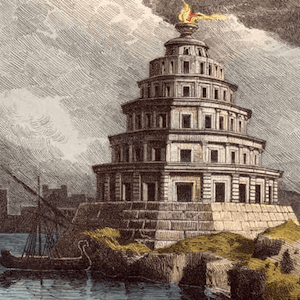