Ptolemy II was a king of the Hellenistic Ptolemaic Kingdom based out of ancient Egypt who was responsible for many achievements including furthering the expansion of the Library of Alexandria, the completion of the Pharos Lighthouse and maintaining the kingdom his father had established. He actually begun his reign as co-regent along with his father Ptolemy I Soter for two years from 285 BCE to 283 BCE and oversaw the daily affairs in Alexandria while his father chose retirement in his final years. He was one of the most successful members of the Ptolemaic Dynasty, leaving Egypt in a much better condition than he inherited it in. 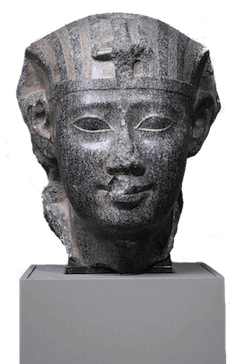 Egypt was involved in several wars during his reign. Magas of Cyrene opened war on his half-brother (274 BCE), and the Seleucid king Antiochus I Soter, desiring Coele-Syria with Judea, attacked soon after in the First Syrian War. Two or three years of war followed. Egypt's victories solidified the kingdom's position as the undisputed naval power of the eastern Mediterranean; his fleet (112 ships) bore the most powerful naval siege units of the time, guaranteed the king access to the coastal cities of his empire. The Ptolemaic sphere of power extended over the Cyclades to Samothrace, and the harbours and coast towns of Cilicia Trachea, Pamphylia, Lycia and Caria.In the 270 BCE Ptolemy hired 4,000 Gallic mercenaries (who in 279 BCE under Bolgios killed his half-brother Ptolemy Keraunos). According to Pausanias, soon after arrival the Gauls plotted “to seize Egypt,” and so Ptolemy marooned them on a deserted island in the Nile River where “they perished at one another’s hands or by famine.”[2]

The victory won by Antigonus II Gonatas, king of Macedonia, over the Egyptian fleet at Cos (between 258 BCE and 256 BCE) did not long interrupt Ptolemy's command of the Aegean Sea. In a Second Syrian War with the Seleucid kingdom, under Antiochus II Theos (after 260 BCE), Ptolemy sustained losses on the seaboard of Asia Minor and agreed to a peace by which Antiochus married his daughter Berenice (c. 250 BCE).Ptolemy was of a delicate constitution. Elias Joseph Bickermann (Chronology of the Ancient World, 2nd ed. 1980) gives the date of his death as January 29.Family[edit]Ptolemy's first wife, Arsinoë I, daughter of Lysimachus, was the mother of his legitimate children:Ptolemy III Euergetes, his successor.LysimachusBerenice Phernopherus, married Antiochus II Theos, king of Syria.After her repudiation he married his full sister Arsinoë II, the widow of Lysimachus — an Egyptian custom—which brought him her Aegean possessions.He also had several concubines. With a woman named Bilistiche he had an (illegitimate) son named Ptolemy Andromachou[3]This granite statue depicts Ptolemy II in the traditional canon of ancient Egyptian art. Walters Art Museum, Baltimore.He had many mistresses, including Agathoclea (?), Aglais (?) daughter of Megacles, the cupbearer Cleino, Didyme, the Chian harp player Glauce, the flautist Mnesis, the actress Myrtion, the flautist Pothine and Stratonice,[4] and his court, magnificent and dissolute, intellectual and artificial, has been compared with the Versailles of Louis XIV.Ptolemy deified his parents and his sister-wife after their deaths.Court[edit]"Cameo Gonzaga", HermitageThe material and literary splendour of the Alexandrian court was at its height under Ptolemy II. Pomp and splendor flourished. He had exotic animals of far off lands sent to Alexandria, and staged a procession in Alexandria in honor of Dionysus led by 24 chariots drawn by elephants and a procession of lions, leopards, panthers, camels, antelopes, wild asses, ostriches, a bear, a giraffe and a rhinoceros. According to scholars, most of the animals were in pairs - as many as eight pairs of ostriches - and although the ordinary chariots were likely led by a single elephant, others which carried a 7-foot-tall (2.1 m) golden statue may have been led by four.[5] Although an enthusiast for Hellenic culture, he also adopted Egyptian religious concepts, which helped to bolster his image as a sovereign.Callimachus, keeper of the library, Theocritus,[6] and a host of lesser poets, glorified the Ptolemaic family. Ptolemy himself was eager to increase the library and to patronize scientific research.The tradition preserved in the pseudepigraphical Letter of Aristeas which connects the Septuagint translation of the Hebrew Bible into Greek with his patronage is probably overdrawn. However, Walter Kaiser says, "There can be little doubt that the Law was translated in Philadelphus's time since Greek quotations from Genesis and Exodus appear in Greek literature before 200 BCE The language of the Septuagint is more like Egyptian Greek than it is like Jerusalemite Greek, according to some." [7]Relations with India[edit]Ptolemy is recorded by Pliny the Elder as having sent an ambassador named Dionysius to the Mauryan court at Pataliputra in India, probably to Emperor Ashoka:"But [India] has been treated of by several other Greek writers who resided at the courts of Indian kings, such, for instance, as Megasthenes, and by Dionysius, who was sent thither by Philadelphus, expressly for the purpose: all of whom have enlarged upon the power and vast resources of these nations." Pliny the Elder, "The Natural History", Chap. 21 [8]He is also mentioned in the Edicts of Ashoka as a recipient of the Buddhist proselytism of Ashoka.