Alexander's Campaign > Battle of the Hydaspes

The Battle of the Hydaspes was a major battle fought by Alexander III the GreatThe Battle of the Hydaspes was fought by Alexander the Great in 326 BC against King Porus of the Paurava kingdom on the banks of the river Hydaspes (now known as the Jhelum) in the Punjab near Bhera. The battle resulted in a complete Macedonian victory and the annexation of the Punjab, which lay beyond the far easternmost confines of the already absorbed Persian empire, into the Alexandrian Empire.Alexander's decision to cross the monsoon-swollen river despite close Indian surveillance, in order to catch Porus' army in the flank, has been referred as one of his "masterpieces".[16] Although victorious, it was also the most costly battle fought by the Macedonians.[17] The resistance put up by King Porus and his men won the respect of Alexander, who asked Porus to become a Macedonian satrap.The battle is historically significant for opening up India to Greek political (Seleucid, Greco-Bactrian, Indo-Greek) and cultural influences (Greco-Buddhist art), which continued to have an impact for many centuries. 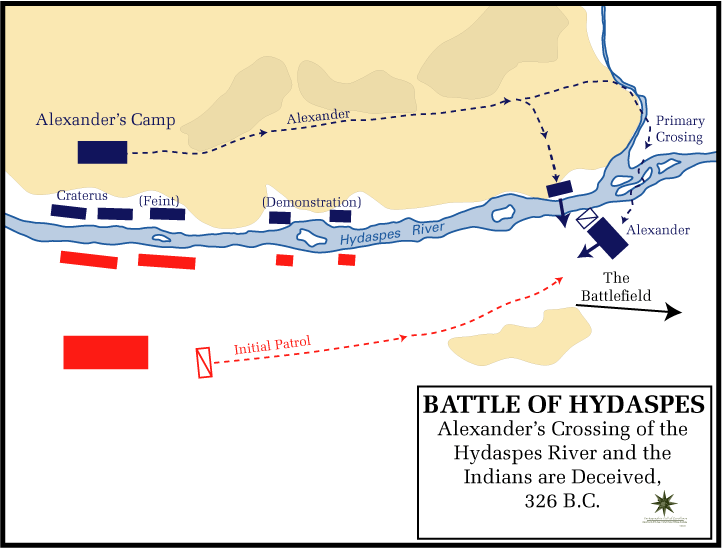 The battle took place on the east bank of the Hydaspes River (now called the Jhelum, a tributary of the Indus) in what is now present-day Punjab. Alexander later founded the city of Nicaea on the site; this city has yet to be discovered.[18] Any attempt to find the ancient battle site is complicated by considerable changes to the landscape over time.[18] For the moment, the most plausible location is just south of the city of Jhelum, where the ancient main road crossed the river and where a Buddhist source mentions a city that may be Nicaea.[18] The identification of the battle site near modern Jalalpur/Haranpur is certainly erroneous, as the river (in ancient times) meandered far from these cities.[18]