Alexandria in Egypt was a city unlike anything the world had seen up until that point. It was founded by Alexander III the Great in April of 331 BC at the mouth of the nile, only a short distance from the Egyptian international port it was going to replace, Thonis-Heracleion.

Alexandria became a global center for not only trade but also culture, education and people of all faiths and origins ventured there to exchange and contribute.

In fact, it was a law upon entering the city that all books were to be confiscated and copied, with the copies returned to the travelers. This strict practice led to one of the largest accumulations of knowledge in the ancient world at the Library of Alexandria.

Nothing Alexander did was ever subtle. He employed a Greek named Dinocrates to oversee the construction of the city as his chief architect. The city was designed from the beginning to be a cultural capital of Alexanders new empire.

It was going to replace both Heraclein-Thonis to the east and the rumored city of Naucratis as the regional trade and economic center. These cities existed for centuries before, but Alexander wanted to create something so much more than just a simple trading hub and border checkpoint. 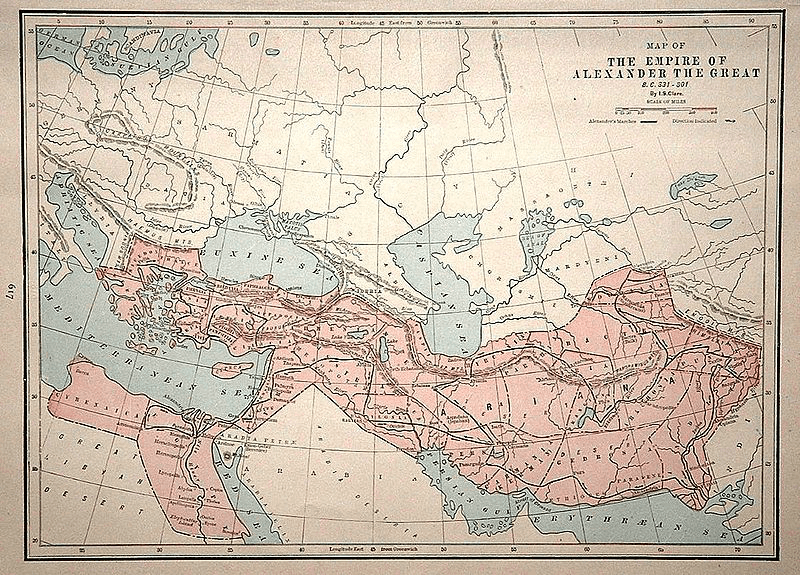 Alexandria assimilated an existing Egyptian city called Rhakotis and was classified as the Egyptian quarter of the city. As soon as the foundations for the city were constructed Alexander left the city and never was to return as he would meet his fate in the Hanging Gardens of Babylon later that year.

In Alexander's stead however, his capable viceroy named Cleomenes took over leadership in the city and continued to build the city. When Alexander died the city was claimed by Ptolemy I who managed to bring Alexander's body to Egypt for burial, most likely at an elaborate tomb.

However, with another mystery associated with Alexander the Great, no one knows where his body and tomb is. It was separated from the burial procession and lost to history. Or so you may believe

At Alexandria many of the ancient wonders of the world were constructed. In addition to the Library of Alexandria, Alexander the Great ordered the construction of a massive earthen walkway to an island off the coast where he built an incredible lighthouse, one of the tallest structures in the world until its collapse.

The intellectual and cultural center of the ancient world was Alexandria for some time. The city and its museum attracted many of the greatest scholars. Jews, Syrians and Greeks also went there. The city was later plundered and lost its significance.[2]Although Cleomenes was mainly in charge of overseeing Alexandria's continuous development, the Heptastadion and the mainland quarters seem to have been primarily Ptolemaic work. Inheriting the trade of ruined Tyre and becoming the center of the new commerce between Europe and the Arabian and Indian East, the city grew in less than a generation to be larger than Carthage. In a century, Alexandria had become the largest city in the world and, for some centuries more, was second only to Rome. It became Egypt's main Greek city, with Greek people from diverse backgrounds.[4]Alexandria was not only a center of Hellenism, but was also home to the largest urban Jewish community in the world. The Septuagint, a Greek version of the Tanakh, was produced there. The early Ptolemies kept it in order and fostered the development of its museum into the leading Hellenistic center of learning (Library of Alexandria), but were careful to maintain the distinction of its population's three largest ethnicities: Greek, Jewish, and Egyptian.[5] From this division arose much of the later turbulence, which began to manifest itself under Ptolemy Philopater who reigned from 221–204 BC. The reign of Ptolemy VIII Physcon from 144–116 BC was marked by purges and civil warfare.[citation needed]The city passed formally under Roman jurisdiction in 80 BC, according to the will of Ptolemy Alexander, but only after it had been under Roman influence for more than a hundred years. It was besieged by the Ptolemies in 47 BC during Julius Caesar's intervention in the civil war between king Ptolemy XIII and his advisers, and the queen Cleopatra VII. It was finally captured by Octavian, future emperor Augustus on 1 August 30 BC, with the name of the month later being changed to August to commemorate his victory.[citation needed]In AD 115, large parts of Alexandria were destroyed during the Kitos War, which gave Hadrian and his architect, Decriannus, an opportunity to rebuild it. In 215, the emperor Caracalla visited the city and, because of some insulting satires that the inhabitants had directed at him, abruptly commanded his troops to put to death all youths capable of bearing arms. On 21 July 365, Alexandria was devastated by a tsunami (365 Crete earthquake),[6] an event annually commemorated years later as a "day of horror."[7] In the late 4th century, persecution of pagans by newly Christian Romans had reached new levels of intensity. In 391, the Patriarch Theophilus destroyed all pagan temples in Alexandria under orders from Emperor Theodosius I. The Brucheum and Jewish quarters were desolate in the 5th century. On the mainland, life seemed to have centered in the vicinity of the Serapeum and Caesareum, both of which became Christian churches. The Pharos and Heptastadium quarters, however, remained populous and were left intact.[citation needed]