Archimedes (287-212 BCE) was a famous Greek engineer, mathematician, physicist, astronomer and inventor from the city of Syracuse on the island of Sicily who pioneered many early great scientific ideas in the ancient world. He is credited with not only accurately predicting calculus but basically creating the field of physics and the concept of applying mathematics to the phenomena of the real world. Some historians even believe him the best mathematician of all time. 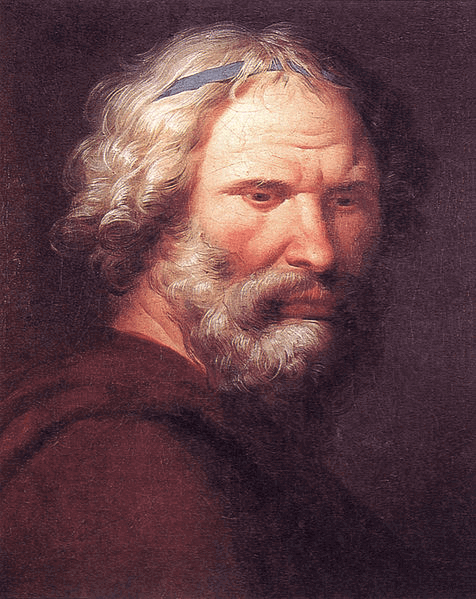 The importance and influence of Archimedes and the development of the sciences as we know them cannot be understated. He is probably one of the most influential thinkers and scholars of the ancient world and he was killed at the age of 75 by an invading >Roman soldier during the Siege of Syracuse in 212 BCE.

He is credited with the creation of numerous inventions that would later be studied and influence people like Leonardo da Vinci and the thinkers throughout the Roman and Byzantine Empires. His influence on the development of the sciences and engineering cannot be understated.

Archimedes is considered by some historians to be the greatest mathematician of the ancient era and possibly of all time as well. Some of his achievements in the field of mathematics include predicting modern calculus, analyzing concepts of infinitesimals and proving many different geometric theorems such as the area of a circle, the surface area and volume of a sphere and the area under a parabola.

Some of his other accomplishments in mathematics include accurately estimating the number of pi along with defining what is known as the Archimedes Sphere and creating the system of exponentiation that could be used to express extremely large numbers. He also was the first person to apply mathematics to the real world in what would later become the theory of physics.

He is credited with founding the fields of hydrostatics and statics along with making major discoveries into the physics behind the simple lever machine. He is also the inventor of many great inventions of both civil and wartime application such as the screw pump that was modeled after the ones in Assyria and Babylonia and the defensive machines used to protect Syracuse from enemy invasions.

While these concepts can be found in any college math textbook nowadays, the discovery of these concepts in the ancient world was truly a legendary feat. In fact, most of his discoveries in the area of mathematics were not written about until several hundred years after his death. Following his death mathematicians located at Alexandria most likely at the Library of Alexandria would read and quote his work but it was not put together in a single body of work until about 530 CE by Isidore of Miletus in the city of Constantinople.

Archimedes was known to have created several brilliant defensive weapons for his native city of Syracuse for times when it was under attack by invading parties along with many inventions for civil use. These inventions would become part of his greatest legacy and would be studied and provide the inspiration for many of Leonardo da Vinci's inventions.

It is believed that Archimedes invented a novel and revolutionary technique for attacking ships by using mirrors to have them catch fire, often called the Archimedes Death Ray. It was said this method was later used at the Siege of Syracuse however, this legend originated in Europe during the Dark Ages and is most likely not true even if it is possible to do.

This concept was tested on the show Mythbusters. More on that to come. 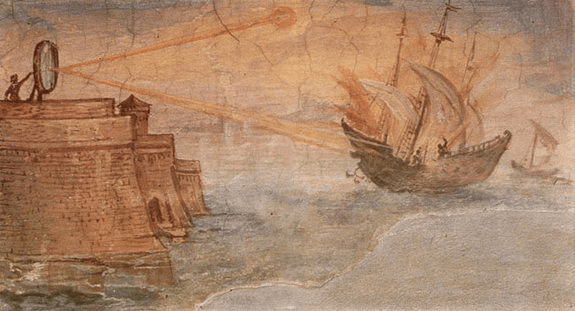 There are no contemporary accounts of Romans or Greeks describing using massive mirrors to start ships on fire. However, some people such as Cesare Rossi who is a mechanical engineer at the University of Naples in Italy believe Archimedes instead created an early steam cannon that would fire hollow clay balls filled with an incendiary chemical known as Greek Fire that is akin to modern napalm at ships which served the same effect.

An early steam cannon would only need the energy from about 30 grams (1/10 of a cup) of water converted into steam in order to create enough pressure to propel the clay ball at an invading ship. Considering Archimedes practically invented the fields of hydrostatics and water physics I think it is safe to assume he was knowledgeable enough about water and engineering to create this invention.

Plutarch describes a pole shaped device that forced to Roman soldiers to flee from the walls of Syracuse and the Greek-Roman physician known as Galen corroborated a burning device used against Roman ships. The translation of Galen's account in no way describes mirrors.

It is believed by some that Archimedes himself was behind the development of the mysterious Greek Fire however this is disputed by some historians. As more evidence becomes uncovered regarding Archimedes steam cannons it is most likely that Archimedes may have either developed Greek Fire or a chemical compound extremely similar that displayed extremely flammable properties.

While Archimedes is largely given credit for the invention of the water screw in ancient times this cannot be further from the truth. For about 400 years and possibly longer the people of ancient Assyria and Babylonia were masters of water engineering and created great wonders of the world centered around water, as this was necessary and vital for life in their arid climate.

In fact the first water screws were used in structures known as the gardens, which were often massive multi-story buildings featuring plants and flora from throughout the empire. The most famous one of these being the Hanging Gardens of Babylon featured at the city of Babylon. These water screws would be used to move water from the ground level up the many tiers of the raised gardens. It was from Assyria and Babylonia that Archimedes was able to get the foundations in order to construct his own version.

Archimedes would be killed during the Siege of Syracuse (212 BCE) by a Roman soldier despite orders strictly commanding not to harm him. His death represented the loss of one of the greatest scientific minds that the world had ever or will ever see.

We do not know the fate of the unnamed Roman soldier that killed him but we hope he was punished for a long time and with extreme prejudice.