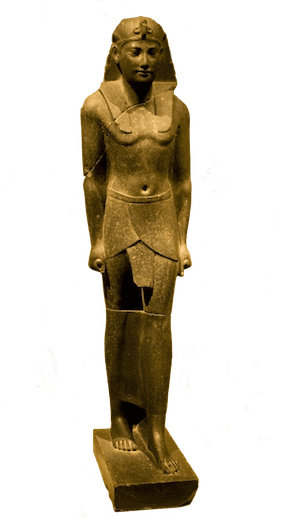 Ptolemy III Euergetes, known in Greek as Πτολεμαῖος Εὐεργέτης or Ptolemaĩos Euergétēs was the third king from the Ptolemaic Kingdom who reigned between 246 BCE and 222 BCE over the Ptolemaic Dynasty of Egypt. His father was Ptolemy II and his grandfather Ptolemy I had originally established the kingdom based out of the port city of Alexandria in Egypt from the fragmentation of Alexander III the Great's empire following his mysteries death in 321 BCE.

Ptolemy III is known also as Ptolemy III Euergetes or the Benefactor due to his major contributions to the Library of Alexandria including constructing the Serapeum as well as the use of bilingual Greek and Hieroglyphic languages that were commonly used during the era. Ptolemy III was responsible for setting the precedent of creating bilingual stone tablets that displayed royal decrees and laws. Some of the most famous of these artifacts are the Canopus Stone erected in 238 BCE as well as the Memphis Stele in 218 BCE. This tradition passed down to his son Ptolemy IV who was responsible for the creation of the world famous Rosetta Stone in 196 BCE.

Ptolemy III earned his moniker the Benefactor by greatly helping to contribute to the state sponsored Library of Alexandria as well as the culture of Egypt as a whole. Following with his predecessors he decreed that every book or manuscript that was offloaded in the port of Alexandria was to be confiscated and the owner compensated. The book was copied by the multitude of scribes and the original kept within the library.

One of the famous stories surrounding Ptolemy III was that he borrowed famous works from Aeschylus, Sophocles and Euripides from the city of Athens and decided he did not wish to return them to Greece and instead let them keep the large deposit he had paid to them. The works were promptly donated to the library.

In fact during this time the library actually ran out of space to store all of the papyrus scrolls so a new building known as the Serapeum had to be constructed. Despite being commissioned in 237 BCE Ptolemy III would not live long enough to see its completion in 231 BCE. The Serapeum would not officially open until 142 BCE under the reign of Ptolemy VIII due to all the political turmoil following the successive reigns.

Ptolemy III is also famous for constructing the Temple of Horus at Edfu as well as adding to the Karnak Temple Complex like many other Egyptian kings before him.

He was even more liberal towards Egyptian religion than his predecessors. He supported, promoted, and contributed towards various cults, particularly those of the Apis and Mnevis Bulls, as is stated in the Canopus Decree of 238 BC, in which the Egyptian priesthood praise him and his wife as "Benefactor Gods" for this religious support,

One notable aspect of the reign of Ptolemy III was that he did not issue coins in Egypt with his face on them. Instead most were depicted with Zeus/Amun on the obverse side and the traditional Ptolemaic eagle on the reverse.

Ptolemy III's reign was also marked by trade with other contemporaneous polities. In the 1930s, excavations by Mattingly at a fortress close to Port Dunford (the likely Nikon of antiquity) in present-day southern Somalia yielded a number of Ptolemaic coins. Among these pieces were 17 copper mints from the Ptolemy III to Ptolemy V dynasties, as well as late Imperial Rome and Mamluk Sultanate coins.[8] 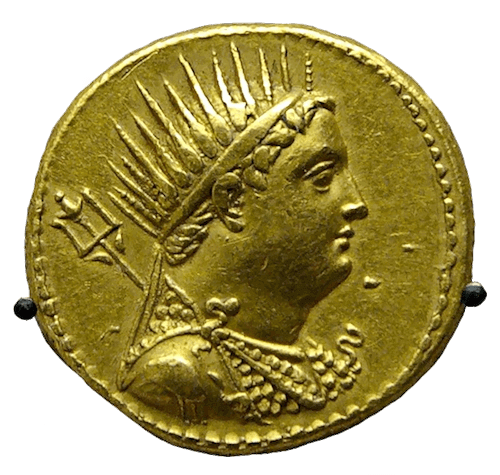 as well as for maintaining peace by strong national security, and for good governance, including when he imported, at his own expense, a vast amount of grain to compensate for a weak inundation.

He maintained his father's foreign policy of subduing Macedonia by supporting its enemies. Ptolemy backed the Achaean League, a collaboration of Greek city-states, and enemies of Macedonia, but switched his support to Sparta when it came into conflict with the Achaean League and proved itself more apt to fighting the Macedonians.

Following political turmoil in the Seleucid Empire, Ptolemy's oldest sister named Berenice Phernophorus was murdered along with her infant child. In order to avenge his sister as well as claim more territory for the Ptolemaic Kingdom, Ptolemy III invaded the area of Coele-Syria in what became known as the Third Syrian War. While he was away on the military campaign he left his wife Berenice II in charge of the royal affairs.

During this military campaign Ptolemy III was able to capture the cities of Seleucia Peiria, Antioch and even Babylon. However, in 241 BCE in exchange for peace between the two Hellenistic kingdoms, the Seleucids granted Ptolemy control over the cities of Seleucia Pieria and Antioch Epidaphne as well as 1,500 talents of silver.

During the conquest of the Seleucid territories Ptolemy III was able to continue his intellectual pursuits as well by reclaiming many Egyptian art pieces, sculptures, monuments and other cultural artifacts from the previous Achaemenid conquest of Egypt. Following the peace with the Seleucids the Ptolemaic army was forced to retreat to Egypt to deal with civil unrest that was growing in the kingdom. It was during the Third Syrian War that the Ptolemaic Kingdom would reach the height of its power and territory.

The Third Syrian War is cryptically alluded to in Daniel 11:7-9.[7]Euergetes ("Benefactor") was the eldest son of Ptolemy II Philadelphus and his first wife, Arsinoe I, and came to power in 246 BC upon the death of his father. He married Berenice of Cyrene in the year corresponding to 244/243 BC; and their children were:

Arsinoe III, born in ca 246/245 BC. She later married her brother Ptolemy IVPtolemy IV Philopator, born ca 244 BCPossibly Lysimachus. The name of the son is not known, but he is said to have been born in ca 243 BC.[1]Alexander, born in c. 242 BC [2]Magas, was born in ca 241 BC. Scalded to death in his bath by Theogos or Theodotus, at the orders of Ptolemy IV.[3]Berenice, probably born in ca 239 BC and died a year later.[4]Ptolemy III's stone contains decrees about priestly orders, and is a memorial for his daughter Berenice. But two of its 26 lines of hieroglyphs decree the use of a leap day added to the Egyptian calendar of 365 days, and the associated changes in festivals.